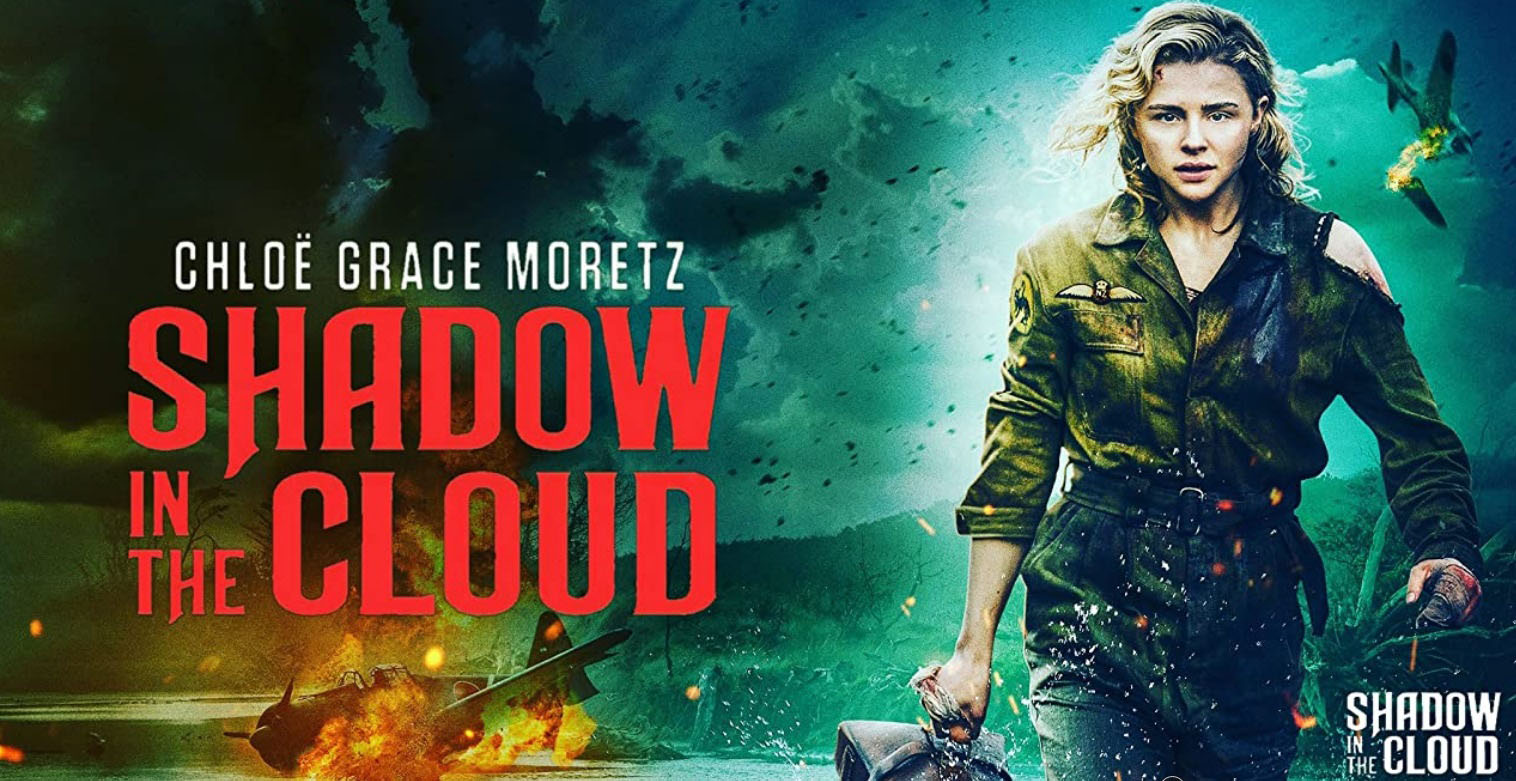 There’s an undeniable seriousness that the new action horror film “Shadow in the Cloud” takes at every minute of its running time. That seriousness becomes crucial to a film that will ultimately require us to have faith in its wonder.

There is a scene about fifteen minutes into “Shadow in the Cloud” where the film seems to re-calibrate itself and establish exactly what type of film it is likely to be. Then, thirty minutes later, there’s another change in the narrative that sends the plot in a different direction. Both moments seem to exist on the brink of something incredibly foggy. One wrong step and it could completely distort the balance of the film. It says a lot about Roseanne Liang’s control of the tone of the film that both moments feel like they are developing organically rather than awesome. The balancing act between potentially dual shades is central.

After a short animated sequence parodying a WWII cartoon and predicting an important plot point, the film opens on the hands of Maude Garrett (Chloë Grace Moretz) preparing a package. Maude is a British aviation officer who is trying to track down an aging Allied B-17, which was forebodingly dubbed ‘The Fool’s Errand’. She brings papers saying she must accompany the crew on their flight from New Zealand to Samoa. The crew of men is skeptical, but Maude insists this is essential, just as vital as the package he carries with her that is part of a secret mission. She has been released into the ball turret for the ride, and without a place for her top secret package one of the officers offers to hold her.

We follow Maude down to the turret, a closed space at the bottom of the fighter plane, and we stay with her there for some time. She can hear the crew, but she can’t see them. In these opening scenes, Liang quickly sets up the poles – teasing the contents of the mysterious package, emphasizing the sexism of the crew, and signaling the claustrophobic paranoia that threatens to overwhelm Maude, who manages to keep his wits while even against the hostility she has met.

Maude’s involvement in the turret, taken from the men above her, is metaphorical as she listens to them joking about it on the radio. But though she can’t see them, she can see things they can’t. In particular, she can see the activities on the underside of the aircraft that signify some supernatural doom that will endanger everyone. From the first appearance of the supernatural terrorist threatening to board the ship, the tension increases. And he never gets angry after that.

There is an informed goofiness to the whole situation so that by the last twenty minutes, freneticism that devolves into full-blown chaos becomes less pleasurable because we are invested in what occurred but due to the energetic momentum of Liang’s direction. It’s a strange marriage of emotions. Textually, this doesn’t seem like a fun time, but by the film’s final fight sequence, his dedication to a throwback thrill feels welcome and enjoyable. The specific details of the plot are less important than the modulation of tone and tone in this work.

Central to this is Chloë Grace Moretz. For long portions of the film, we just stick with it and it works well with Liang, digging into a sensibility that is rarely shown before. It’s a sharp performance that “Shadow in the Cloud” relies on to sell its inversions. We trust Maggie Moretz, so by buying into her point of view, we’re ready to follow the film as it begins to deconstruct itself – and the very plane it happens on. This is kind of low-budget B-movie work, but nothing on screen – from photography to its practical effects – suggests this. The film privileges a kind of artificiality at a playful level even as it intersects with real-world issues.

There’s a sequence where Maggie listens to the presentation of the male crew above, Director of Photography Kit Fraser frames them as the introductory reels of famous celebrities in the days of early cinema. They turn to look at us through the cameras as we hear their key details about them. It’s a kind of self-conscious embodiment of a tropey cinema that entertains but establishes the peculiarity of the work.

It’s little things that might seem at odds with the final credits sequence that distracts women who served in the army. But Liang knows exactly what she’s doing. “Shadow in the Cloud” builds on a long tradition of lonely women in male environments. “Alien” may be the most prominent precursor, even if not entirely in that league. But the film is not just an adaptation of feminist ideology. It is invested, even if in pastiche ways, with the ways in which Maude’s feminism will come to define her survival and goals. But it’s also a goofy monster movie with a steady stream of action sequences that rave about the ways they strain the limits of credibility. In the end, it works because it’s a very entertaining ruse.

Shadow in the Cloud is available on Prime Video and other streaming platforms.