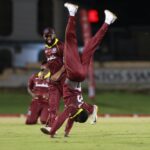 Sinclair aims to impress if selected for next month’s Super50 Tournament set for Antigua from Feb. 4

Kevin Sinclair is fulfilling his trademark summer during the last Regional Super50.

Kaieteur News – After a 52-year-old girl traveling from New York became the first covid-19 case in Guyana on March 5, 2020, all sports were shut down later that month due to the Pandemic. However, Guyanese outfielder Kevin Sinclair played five games in the 2020 CPL in August and also competed in the US Open in Florida last December during that time.
Sinclair, who turned 21 last November, told Kaieteur Sport on Wednesday that despite a covid-19 presence in Region Six, he had an enjoyable Christmas with his family and is now back to training with the Jaguars Franchise players.
“I spent my Christmas vacation with my family at Angoy’s Avenue in New Amsterdam but I also did some work on my game. We were due for a fitness test at Track and Field Stadium in West Demerara but rain washed that out, ”said the former talented national youth player.
The Berbician will take part in three practice matches next week before the Guyana Jaguars team is selected for this year’s Regional Super50 scheduled for Feb. 4-27 in Antigua.

Kevin Sinclair receives his award for the 3-day Under-19 Player of the Year at the Brian Ramphal BCB 2019 awards ceremony.

Sinclair, who has gradually improved with his range and ability to turn the ball, said he was looking forward to making his first ‘A’ appearance for Guyana after being the most economical bowler when winning featured in the West Indies of the 2019 Super50 Regional in Trinidad.
He has played nine ‘A’ List games; made 132 runs and 13 wickets at an average of 14.69 and an economy rate of 2.87. He was also the bowler with the best economy rate for the Guyana Amazon Warriors in his first CPL; grabbed five wickets for 61 of 84 balls.
“Yes, I am working to win my place on the team for the Super50 and if I am selected I will try my best. I don’t really set too many goals but hope to improve as the tournament progresses. I’m looking to showcase my talent with bats and balls ”said Sinclair who played the first of his six First Class matches for Guyana on January 16. Sinclair has scored 130 runs and taken 12 wickets at this level.
Known for his double summers to celebrate his dismissal of batsmen, the hyperactive youth representing Rosehall Town Youth and Sports Club said he was grateful for the opportunity to participate in this year’s CPL even though they were not fans of the Stalls.
On his first CPL appearance on Aug. 30, Sinclair opened the batting and bowling against the St. Kitts and Nevis Patriots. “In the CPL I didn’t score the kind of runs I knew I should have but with the ball I think I’m excellent.
I learned a lot in the CPL in terms of consistency in bowling in a certain area … although the strike batting has to be rotated up there … while giving away the bad balls is very important ”said Sinclair, a cousin of former Guyana Controller and Assistant Coach USA, Kevin Darlington.
He said that he liked to play all formats but that he seemed more comfortable playing ‘white ball cricket’ and should be a security for the trip to Antigua.
Sinclair is adamant that he is a universal batsman he has shown in club cricket but he has not yet converted that form to the Regional level he hopes to repair if selected for his first appearance 50 – he turned for his Country this year. .
Six teams will compete in the Super50 Regional tournament; Barbados, Guyana, Jamaica, Leeward Islands, Trinidad and Tobago, and the Wind Islands.