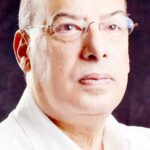 Sir Ronald Sanders to serve on the University of London Committee

– focus on the future of Commonwealth Studies

(Washington, DC, January 11) – Caribbean Veteran diplomat Sir Ronald Sanders has been named to a 10-person committee to conduct an inquiry into the future of Commonwealth Studies at the University of London.
The Committee’s announcement was made yesterday by the University’s Vice-Chancellor, Professor Wendy Thompson. Sir Malcolm Rifkind, former Secretary of Defense and Foreign and Commonwealth of the British Government, will chair the Committee.
Sir Ronald, who is the Ambassador of Antigua and Barbuda to the United States and the OAS, has been involved in Commonwealth affairs in several roles since 1982. His scholarly work on the Commonwealth has been widely published he was Rapporteur of the Eminent Persons Group, created by the Head of Government to make recommendations on Commonwealth reform in 2011.
Ambassador Sanders said yesterday: “I am delighted to serve on this important Committee. The Commonwealth has been a significant actor in world politics – for example in ending Apartheid in South Africa. Because of its diverse membership, it has the ability to help the world negotiate solutions to global problems. Therefore, Commonwealth studies are important to the teaching and research of the University ”.
The other members of the Committee are drawn from the academic community and include Professor Asha Kanwar – President and CEO of the Commonwealth of Learning and Dr. Joanna Newman, Chief Executive and Secretary General of the Commonwealth Universities Association. From the practical world of Commonwealth relations, the other members of the Committee are Mr Stephen Twigg, Secretary General of the CPA and Mr. Michael Kirby, former Justice of the High Court of Australia.
The Committee will hold its first meeting on January 21 led by Sir Malcolm. It is expected to take evidence from across the Commonwealth and submit its report and recommendations by June 2021.