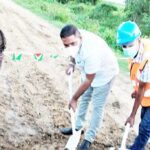 Soil turned for a $ 327M asphalt road on Onverwagt

The way it is expected to be done.

Kaieteur News – Onverwagt, Mahaica-Mahaicony and Abary (MMA) West Coast Berbice farmers are expected to benefit from a multi-million dollar asphaltic farm to market a road that is expected to stretch five kilometers and be six meters wide. Romel Jagroop Construction Services was awarded the $ 327M contract after a successful bidding process.
Agriculture Minister Zulfikar Mustapha, who attended the soil turning ceremony on Saturday, was keen to point out that the project is an important one as it is part of the government’s plan to modernize and upgrade infrastructure throughout Guyana.
Well aware of the difficulties farmers have to face because of poor road infrastructure, the Minister said he planned to make representation at his first Cabinet meeting for emergency funds to carry out work in the Mahaica-Mahaicony and Abary Scheme .
Kaieteur News understands that some $ 90M has already been spent in the MMA scheme on the clearing canals, repairing dams and ensuring critical structures are repaired.
In addition, the Minister assured that the engineers involved in the National Drainage and Irrigation Authority (NDIA) would be robustly monitoring the road project so that value for money could be achieved. With the new way, the Minister noted that many farmers are set to benefit from opening 30,000 acres of rice land.
Regional Chairman Vickchand Ramphal, who was also in attendance, said farmers will now feel a sense of relief as they have faced many difficulties in transporting produce out of the area. The well-attended event saw the presence of NDIA Chairman Lionel Wordsworth; Vice Chairman, Rion Peters; and Finance Minister, Ashni Singh.