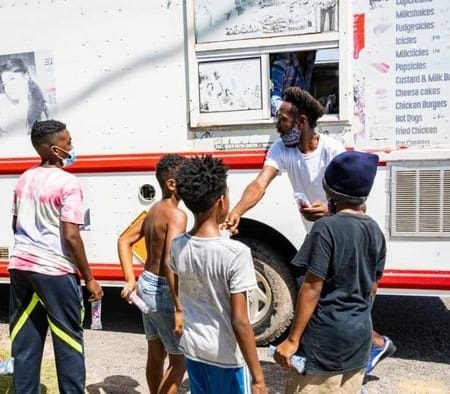 Contrary to what its name might suggest, Standpipe Foundation has nothing to do with pipelines or water supply. The name of the non-governmental organization (NGO) was derived from the “Standpipe Crew,” a group of friends who decades ago would hang out in a corner in Tucber, in New Amsterdam, Berbice. Some of the crew members have since migrated and are now giving back to the community through the group, which has several projects in the works for the benefit of Tucber youth and elderly.

The NGO was set up during the onset of the pandemic following a conversation among a group of friends who wanted to give back by improving the quality of life for Tucber residents as well as helping them realize their ambitions.

Moore, who is also the assistant coach of the Guyana Jaguars, told Stabroek Weekend that since the initiative began, other community members have joined forces to assist with the humanitarian efforts.

The first project was to distribute 240 food hampers to families in the community as well as to residents from other nearby communities. The Standpipe Foundation periodically cleans the drains and parapets in the village. This cleanup has been extended to elderly residences at no cost and the group is currently also providing landscape maintenance in the homes of six elderly residents.

Moore said the group even provided plumbing, fencing, and taking derelict stairs and a separate veranda and rebuilt them for several elderly people. He added that weeding services are regular for the elderly.

The group has also distributed about 400 disposable face masks and plans to distribute another batch soon.

Other projects included the distribution of 2,000 ice cream and cones for children in the area.

Moore pointed to these projects, usually coming from the pockets of NGO members and local residents as well as Tucber residents.

One young man who recently started a chicken business benefited from a grant from the organization.

The NGO is currently looking to introduce laptops to the children who performed best in the National Grade Six Assessment and Caribbean Certificate of Secondary Education examinations. Those who scored the highest marks in both examinations will also receive financial incentives.

Moore explained that they will also provide free printing services to school children so they can easily access the hard copies of their lessons. In addition, the foundation is working on finding back-to-school supplies for children and will distribute these in time to come.

“The feedback has been great,” Moore shared. “A lot of people like what we do. This is the first time in my life that something like this has been done for the community. Residents have been joining in to volunteer their services or to volunteer the funding. It feels great. Apart from helping people, it’s more rewarding to know that you’re making an impact on the community you live in, where you grew up and belong to. I think that is the greatest satisfaction for us, knowing that we can give back and try to improve the lives of residents here. ”

Although most of the initiatives are centered on the Tucber community, Moore shared that they hope to eventually extend their services to other communities in New Amsterdam.

Individuals who want to be part of the Foundation’s philanthropic campaign can reach it on its website: http://www.standpipefoundation.com/; Facebook Page: Standpipe Foundation – Helping Tucber Hands; or by phone: 654-0469 or 615-9239.