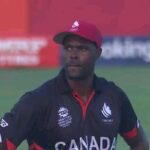 Kaieteur News – Over the years, one of the major issues affecting the development of Berbice Cricket has been the lack of support that the Berbice Cricket Board received from former cricketers, who turned their back on it after they had finished playing the made them famous. . Those days seem to be in the past now as an administration led by Hilbert Foster convinced them to come aboard the ship and be part of the fast-paced development of the Old County game.
Former cricketers such as Clayton Lambert, Leslaine Lambert, Ray Joseph, Jerry Angus, Kevin Darlington, Troy Halley, Narsingh Deonarine, Vishal Nagamootoo and Mahendra Nagamootoo have recently contributed to the development of the game, while current players Shimron Hetmeyer, Kevin Sinclair and Romario Shepherd has become the sponsors of cricket tournaments.

Two other former players, Hemnarine Chattergoon and Jeremy Gordon, are the latest to join the growing roster as Foster spearheads a massive marketing campaign to attract sponsorship for cricket tournaments and development programs that his board plans to run this year.
Chattergoon, a former Guyana and West Indies under-19 batting star who also represented Canada at the first-class level, would sponsor a 20/20 team tournament one day three in his home village of Fyrish. The home team, Courtland and Kilcoy would face off to win the Chattergoon Brothers Challenge Cup with a winner scooping all prizes. Gordon, who still plays the game in Canada and plays for Canada at the international level, would sponsor a three-team tournament one more day at the Edinburgh Ground. The teams would be Edinburgh, Tucker Park and Guymine. The winner would take home the Gordon Cup.
Foster noted that the main objectives of the one-day tournaments are to take the game to areas where the passion for the game has diminished to attract young people to the game and inspire clubs to be more organized. The BCB hopes to run at least eight of these one-day tournaments in late February under the strict rules of Covid 19. No spectators would be one of the rules in place.
Meanwhile, the Upper Corentyne Cricket Association has been able to attract sponsorship for hosting a 40-round robin round tournament. A total of twenty-eight teams within the subsidiary would play in the tournament. The BCB has also confirmed a sponsorship agreement with Gov. MP Faizal Jafferally to host a 20/20 Cup for eleven teams in the West Berbice Subsidiary. Both of these tournaments would be launched soon.