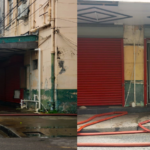 Views from the fire yesterday.

Kaieteur News – It was a major scare yesterday after a fire of suspected electrical origin exploded and gutted a kitchen area of ​​the Fogarty building on Water Street, Georgetown. Other parts of the Fogarty’s didn’t suffer much damage but thick smoke had spread to other parts of the building. After the fire was lit, those areas had to be ventilated.
Chief Fire Officer Marlon Gentle told reporters that at approximately 09: 32hrs Guyana Fire Service (GFS) had received calls of smoke emanating from the building.
Navitri Narine, who operates a pharmacy in the Guyana Post Office (GPO) Building, around 9:30 pm, said she smelled something burning but took it for granted. However, a few minutes later, he saw smoke emanating from the east end of the building. She added that she owned a storage bond in the Fogarty building which was not too far away from where she saw the smoke.
Narine continued to call the GFS immediately and was told that firefighters were already on their way.
The businesswoman said they arrived shortly thereafter and had some trouble with access to water and their hose, but they managed the fire.
Gentle also explained that the congestion street that led to the building was a minor obstacle. She said it took them eight minutes to clear traffic streets before they could get to where the fire was efficient.
Gentle went on to congratulate his ranks for attacking the fire quickly to prevent the flames spreading to other parts of the building.
He said it was a high risk area and could have been disastrous. Gentle reminded reporters that a fire had exploded at that exact location in 1945 and destroyed the entire block. The Fire Chief added that he was quite grateful that history did not repeat itself yesterday.
An investigation into the fire has since been launched. According to the fire chief, the fire started in the kitchen area and is believed to be electrical. Gentle said his team told him he could have been a faulty extraction fan.