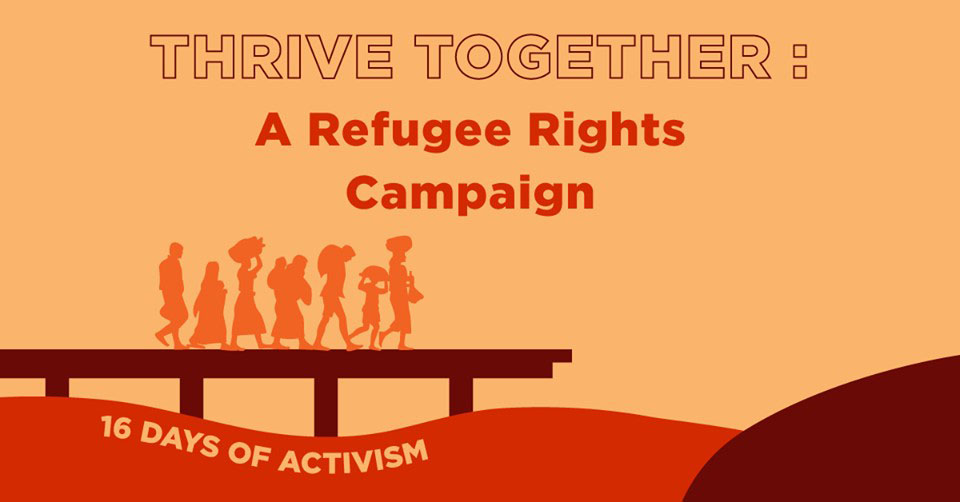 Karyn Diaz is a Trinidadian scholar, writer, educator and activist.

She is a graduate of the Institute of Gender and Development Studies at the University of the West Indies, St Augustine, and Project Coordinator for the “Thrive Together: Refugee Rights Campaign” with WOMANTRA.

Angelique V. Nixon is a Bahamas-born writer, artist, scholar and activist. She is a lecturer and researcher at the Institute for Gender and Development Studies at the University of the West Indies, St. Augustine, and director of the LGBTI feminist civil society organization CAISO: Gender and Gender Justice, Trinidad and Tobago.

In the midst of the COVID-19 pandemic and economic crisis, countries across the region are managing different types of disasters. Longstanding problems multiply and worsen / emerge during moments of crisis. Perhaps the most heartbreaking and normalized are gender-based violence and intimate partner violence – which have risen globally during the pandemic. Furthermore, migration resulting from economic, socio-political and / or climate crises has become even more difficult to manage as countries tackle multiple and complex challenges. Yet, migrants and refugees become easy targets and scapegoats as countries land national borders in reliance on migrant labor and treat migrants as pariah and disposable. There is something here to be unveiled in the violence towards women and children and the violence toward migrants – engulfed at the intersections of class, race and gender.

So far in 2020, 47 women have been murdered in Trinidad and Tobago (45 women and 2 women) – at least two of whom were Venezuelan women. The majority of these murders occurred at the hands of men and through horrific acts of intimate partner violence or sexual assault. In the Trinidad and Tobago Guardian on December 6, Sharlene Rampersad reports a detailed list of names, ages and causes of death, along with reports of missing women and girls and the shocking rates of reported sexual assault. Reported rape rates in 2020 increased to 332 frightening cases by the end of October according to the Trinidad and Tobago Police Service, with 416 girls and women reported missing to date in 2020.

In the middle of 16 Days of Action Against Gender-based Violence, two women have been killed – 18-year-old Ashanti Riley was found dead after being reported missing for three days. Her body was found the same day as the body of Krystal Primus-Espinoza, whose body was found wedged between rocks along the Balandra coast. Both incidents remind us that women are not safe in private or in public: Ashanti Riley was kidnapped and sexually assaulted while taking a private taxi to attend her grandmother’s birthday party, while Krystal went Primus-Espinoza missing from her husband’s vehicle. Investigations are continuing for both of these cases.

Meanwhile in Guyana, 26 Haitian women, men and children were detained after arriving on travel visas and having up to 6 months of stay. Officials initially claimed that they were placed in protective custody for fear of human trafficking (raising the question of why those defined as ‘vcitims’ would then be re-criticized by detention?), Even as the Haitians themselves have insisted that they enter legally and are not trafficked. . The media reports that Haitian children have been separated from their families. Civil society activists and organizations (from Guyana and across the region) have called on the Government of Guyana to respond to requests for clarification on this issue and have encouraged sensitivity and compassion towards Haitian migrants. Moreover, separating children from their parents is unacceptable, given horrific US news reports where thousands have been deported and hundreds of children not only separated from parents but also abused sexual and physical treatment in detention centers. This inhuman treatment and violation of people’s human rights has become part of the xenophobic landscape and has received the treatment of migrants worldwide.

Tourism and outward migration of the Caribbean people should have equipped us to cater for people who migrate to our places. Yet migration remains a highly contentious issue in the region. Although Venezuelans are hypervisible in the current moment, they are certainly not the only migrants to experience xenophobia and deportation. Guyanese, Jamaicans, and Haitians are regularly praised for deportation and unfair treatment throughout the region, despite CARICOM’s obligations and CSME’s presumed freedom of movement and visiting visa agreements.

Meanwhile in Trinidad and Tobago, 16 Venezuelan minors and 11 adults (all asylum seekers) were sent back to Venezuela by the Coast Guard, after they were caught trying to enter “illegally. ” Some defended this act in the name of “national interest,” citing various reasons, including the state’s inability to address crime and the needs of marginalized communities. Xenophobic sentiments filled media and public conversations with conflicting reports about the deportations, as courts ordered the asylum seekers to be returned. Leaders reiterated anti-migration talking points common in the Global North and cited “sovereignty” as reasons for not responding to the calls for humane treatment, international obligations, and asylum claims to uphold. Prime Minister Rowley further flaunted xenophobia as he framed appeals to the state to take a more compassionate approach to migrants and refugees as attempts to give them “more rights” than citizens of Trinidad and Tobago.

Ironically, we call the abuse of Caribbean people as migrants in the Global North while ignoring or endorsing the similar inhuman treatment of migrants in our region. The contradictions and hypocrisy are clear when it comes to immigration within the Caribbean, especially towards people from countries in the worst economic and political situations – historically this has been in Jamaica, Guyana, and Haiti – and since 2014, Venezuela . Guyana’s neighbor in Venezuela also has its share of refugees and asylum seekers escaping political and socio-economic turmoil, which is now exacerbated by the pandemic. The response in this latest situation with Venezuelan migrants in Trinidad and Tobago highlights another contradiction; while our own problems are cited as justification for not assisting migrants and refugees, the Trinidadian state has done little to meaningfully address some of the same issues, particularly alarming rates of violence on the basis of gender and other forms of structural violence.

Further, xenophobia becomes political and gets fired during these already tired times. The Opposition Leader accused the Prime Minister of allowing Venezuelans to enter Trinidad and Tobago in order to win more votes in elections, while the Prime Minister aimed his attention at the institutions demanding a more compassionate and comprehensive state approach to migration. The lack of leadership on both sides highlights what lies at the heart of the migrant crisis: a lack of coordinated and informed action by experts. With only short-term solutions, the response remains weak and without leadership to dispel the most common myths, many use Global North’s narratives to shape their understanding. Every saying “they take our jobs ” should remind us that our claims to” sovereignty “are complex and vexatious because of the failures of globalization and capitalism, working class struggles, and foreign dependency. People’s fears and concerns are understandable amid layoffs, business closures, and economic uncertainty due to the pandemic. Yet we also know that migrant labor is relied on as part of both informal and formal economies, while at the same time the desire to move with freedom is a core concern and should be a right in our region.

If we imitate Global North’s narratives, then it follows that we have internalized some of their values, including harsh individualism, which discourages us from seeking and supporting others. These internalizing values ​​are at the heart of the reluctance to empathize with Venezuelan migrants (among others in T&T such as Jamaicans and Guyanese); very ironic, as our region is known for its large outward (and inward) migration. Most of us know at least one relative or family friend who acquired U.S., British or Canadian citizenship by waiting too long for their visa or other means, but far too many of us harp on the “illegal” entry of migrants today . Our penchant for corruption and pushing the law deepens this contradiction, as does the argument that what our relatives and friends did was “different.” Both Venezuelan migrants living in our region and loved ones living abroad left for greener pastures, by any means necessary.

Anti-immigrant and xenophobic sentiments should be understood in the contexts of violence, economic insecurity, racial and class violence, and the ongoing assault on the lives of women and girls. Too often when we make these kinds of contacts we are told, these are different and we have to prioritize focus and deal with “local issues” first or “one issue at a time”. But we do not live single issue lives, as the black feminist poet Audre Lorde reminds us. It is important to connect the tangible webs of intersectional crime – the lack of value we place on poor lives, migrant lives, Black lives, LGBTQI lives, women’s and children’s lives, all of which are rooted in the historical legacies of colonial violence and racism .

In recognizing the role of popular culture and thinking in challenging gender-based violence and xenophobia, organizations in Trinidad and Tobago have been creating places for public education. One of those places took the form of a social media campaign by the cross-sectional feminist organization WOMANTRA called “Thrive Together – Refugee Rights Campaign” (you can find this on Facebook / Instgram @holeishole). The project seeks common ground between Trinidadian and Venezuelan migrant communities and addresses a problem that both communities face: Gender-based Violence. To highlight this cross-section, “Thrive Together” uses vivid graphics that explain our shared history, language and culture, including our common culture of machismo. Xenophobia has resurfaced at various points in our history: before the Venezuelans, recently immigrated Chinese people were xenophobic texts, and before that, Guyanese and Grenadians. The campaign highlights and clarifies the particular vulnerabilities of migrant women to violence and exploitation in the larger context of this national (and indeed global) crisis of gender-based violence.

Trinidad and Tobago is not the only Caribbean country dealing with these challenges of regional migration and the classist, racist and xenophobic attitudes and policies that dangerously align with the countries of the Global North . Despite CARICOM and CSME, there are a number of restrictions and barriers to freedom of movement across the region. It is important for us to recognize that this is a global issue linked to other issues such as poverty, climate crisis, war and political conflict. Unsettling is never an easy decision. People rarely want to scale all their worldly possessions, carrying the weight of memory, nostalgia and history, to decide what things are important enough to travel with them to a new country and do the painstakingly difficult job of rebuilding communities for themselves . The framing of “immigrant” and “exile” once again highlights the unequal flow of power and capital, where people forced to leave because of unsustainable conditions are called migrants, while those who leaving them is a luxury and an escape to paradise and the good life is called expats. Where is our empathy and where is our anger? How many more women and girls will be killed, lost, assaulted and exploited? All forms of violence are involved; when will we recognize the links between xenophobic violence, structural violence, and gender-based violence?