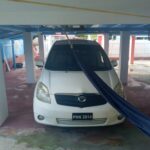 Kaieteur News – A taxi driver’s car was on Tuesday hijacked by his passengers at La Parfaite Harmonie’s West Bank Demerara (WBD) Policeman’s Corner.
The taxi driver, Bhagwandin Narine, 39, of Anna Catherina, West Coast Demerara (WCD), told police that his car had been hijacked at about 21: 10hrs.
Investigators said that besides stealing Bhagwandin’s car, the two male passengers held him at gunpoint and took his $ 75,000 gold wedding band and a mobile phone worth $ 86,000.
Bhagwandin, who told detectives he was risking his trade as a taxi driver in WCD’s New Road Vreed-en-Hoop, revealed that he had been sent to fetch the passengers opposite West Demerara Regional Hospital.
He further detailed that the men were wearing face masks. One of them, he told police, jumped in the front passenger seat of his car while the other sat in the back.
The men told him they were going to the Policeman’s Corner, La Parfaite Harmonie and asked him the price. Bhagwandin told them the price and started driving.
At the Policeman’s Corner, a man instructed him to stop at a sand dune along the way. He complied but the passenger in the back seat grabbed him and put a gun on his head.
Bhagwandin claimed he was told not to say a word. He revealed that the other passenger sitting beside him had left and walked around towards the driver’s side of the car. He apparently opened the door, placed a gun into Bhagwandin’s abdomen and warned him not to make noise; otherwise, he would be killed.
Bhagwandin told police that they searched and relieved him of his cellphone and gold band before throwing him out of the car and driving away.