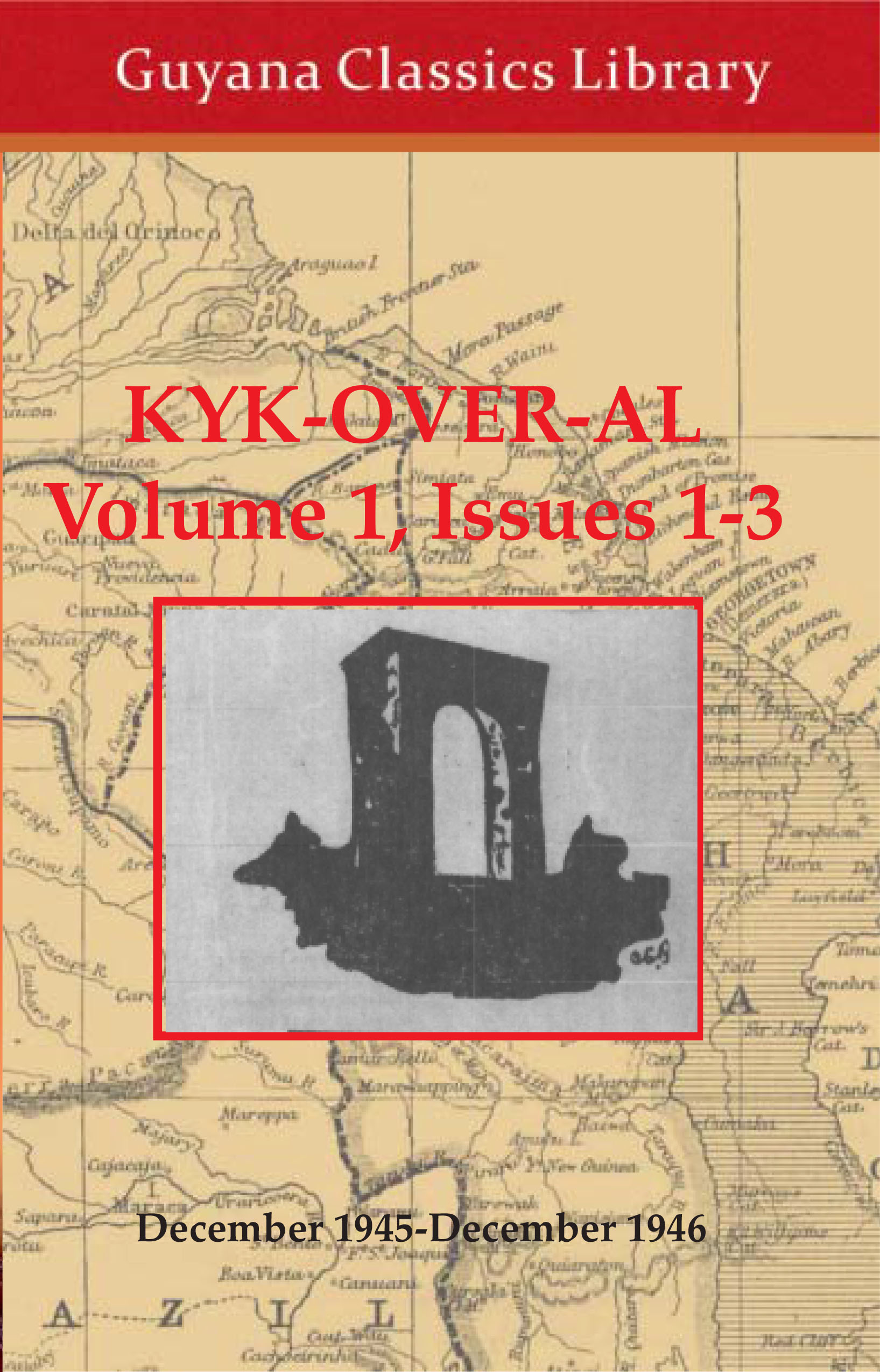 The Attack of the Senses

Who has an eye for Nature’s beautiful forms

And lend an ear to catch his tune,

Will the rose smell a sudden scarlet

When shy bursting out in the dewy morning;

Across the pale blue of the dome of Heaven;

What raging, wholesome winds keep trampling on you;

Will smell the moisture of the ground scrubbed by rain

And deeply breathe the fragrance of its flowers;

Will savor the freshness of the laughing stream

And smack the lips in absolute delight;

These are all more perceived and understandable

We recently reviewed samples of Guyanese poetry published in 1934, commenting on what they reveal about the literature of that period. This week we explore another, published 12 years later, and find similarities that will not be surprising, but we invite observations that are quite ironic. By 1946 there were two anthologies and the establishment of a historical literary journal all of which contain samples of the poetic output of British Guiana in the colonial period of 1831. What they reveal is remarkable.

We refer to the first published anthology of Guyanese poetry – Guianese Poetry 1831 – 1931 (1931) compiled by Norman E Cameron; The Anthology of Local Indian Verse (1934) edited by CEJ Ramcharitar-Lalla; and the Kyk-Over-Al journal founded by BG’s Cultural Clubs Union with AJ Seymour as its founding editor. The verses on their pages say a lot.

The first collection deals with the poetry of the centenary period 1831 to 1931. But why 1931? That was a significant year. It was the start of publications and a quest by Cameron to repair what he saw as a gap in Guyanese literature and awareness as well as highlight the dignity of the Black race that had been superseded and undervalued in those colonial times. But that was also because of what Gemma Robinson explains in her “Introduction” to the reprint of Cameron’s anthology by the Caribbean Press in 2014. “1931 was a year of great inspiration for Guianese. It was the centenary of the union of the three Berbice counties, Essequibo and Demerara into the British Guiana colony. The event was greeted by an explosion of literary events. ”

The second collection grew due to the rise of cultural awareness among descendants of Indian immigrants, some of whom wrote and published poetry. This period included the establishment of several cultural and sports clubs. It was a time when the poetry of the great Indian master Rabindranath Tagore was respected in the Colony. The Anthology of Local Indian Verse was the second published Guyanese anthology and the first by East Indians. But his appearance was thought to be in response to Cameron’s 1931 collection which, when swept 100 years of local verse, contained no East Indians.

A third anthology of published poetry mentioned above was not an anthology, but a literary magazine whose first edition was in 1945. These pages revealed samples of previous age poetry covered by the first two, but also exhibited the new work very important that was developing in the 1940s. The poem printed above – “Attunement of the Senses” by Frank E Dalzell appeared in the Third Volume of Kyk-Over-Al in December 1946. It is very similar to the verses found in Lalla’s anthology Ramcharitar in 1934 but it ■ makes a very interesting comparison with other poems that surrounded it in the journal.

Of great interest is the fact that, with this poem, Dalzell won first prize in the BG Cultural Clubs Union Literary Competition of 1946. Clearly, it was considered a superior model of poetry by the assessment yards at the time. It is ironic, therefore, in comparison with other poems that appear alongside it on the three-volume pages of Kyk between 1945 and 1946. Seymour proclaimed in the editorial notes: “In this edition, in our opinion, the quality of verse is out loud. ” He mentioned that Dalzell, as well as “Jas W Smith and Wilson Harris have some of their best work included, and the pieces Leo has printed. . . all these show that the verse of British Guiana past and present is good and relative. ”

“Attunement of the Senses” is clearly very neatly composed and structured with easy mastery of its rhythm and controlled facility. Yet it is another example of imitation poetry that existed at the time, carried over from the previous era. Like many of his contemporaries and predecessors, he imitates perceived models of good poetry and acceptable exchange. These models came from English Romantic and Victorian poetic language, styles and poetry subjects.

This includes preferred pronunciation such as “scarlet”, “morning”, “heaven’s dome”, “harken”, “o’er”, and “tresses”. Some of the ideas of poetic language are somewhat ancient, like many other obsolete words, but are preserved in the poetry of earlier centuries. In addition, there are conventions where certain words are capitalized because of classical influence that persisted in English poetry. They are capitalized because they are actually personifications. “Nature”, for example, refers to, or is represented by, a natural god or goddess of nature, and is therefore not just a name but a name. Other similar ideas carry over in “Divinity” and “Heaven”.

The next thing to observe is the way in which the poem is subjective. It is a nature poem, glorifying nature and its elements and reflecting romanticism. Wordsworth is imitated in the inevitable influence of nature, as a living supernatural force over man’s inability to resist. Keats is imitated in the concept of empathy and in the sensation. It is a poem that appeals to the senses in a way that reminds one of Romanticism.

But while the verse forms such as those used by Dalzell were published and praised on the pages of Kyk, strong developments in modern Guyanese poetry were found in the same place. From Volume One of Kyk-Over-Al there were signs of poets who rose above the conventions they had inherited and were already independent voices. These included Wilson Harris from the outset with “Tell Me Trees, What Are You Whispering”, and “Words Written Before Sunset”. James W Smith’s “To A Dead Silk Cotton Tree” was landscape poetry that manages to be local and quite free from the imitative.

Walter McA Lawrence also inherited that brand of landscape poetry, but turned it into something inventive. He developed a patriotic verse of landscape praise and developed literature based on the country’s natural beauty. This continued long after him. Other excellent examples of confident new developments with a strong sense of post-colonialism were Edgar Mittelholzer’s “For Me –The Back-yard”, Seymour’s “Tomorrow Belongs To The People”, and the early poetry of Helen Taitt, the only female the leading poets at that time.