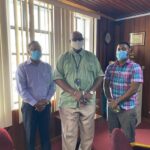 Largest quarry license in the region granted to Jagmohan

The company said it was investing in state-of-the-art equipment to deliver one of the most modern operations.

Kaieteur News – “Finally, after almost a decade since the last Quarry License (QL) was issued, Black Jaguar Investment Group Inc. (the company), a wholly owned subsidiary of El Dorado Trading Group of companies, secured on December 1st. , 2020, Quarry License (Large Scale). ”
That’s how a statement from the company described the issuance of the license.
The principal is Tamesh Jagmohan, one of the largest gold dealer in the country who has also been investing in housing.
The production of quarry stone will help to reduce scarcity, especially with indications of a significant number of large-scale projects underway.

Businessman, Tamesh Jagmohan; GGMC’s head, Newell Dennison, and another officer when transferring the quarry license, a few weeks ago.

“This quarry license was issued by the Guyana Commission for Geology and Mines (GGMC) for the extraction and processing of rock to produce boulders and aggregates of various sizes. The last QL was issued to Durban Quarries Inc. in 2010. ”
The license, obtained by the company, is located on the Mazaruni River in Region Seven in the vicinity of Marshall Falls.
“The QL covers an air space of 7,086 acres, making it the largest QL in existence in Guyana and the Caribbean. The combined acres of the other QLs that exist in Guyana are not equal in size to this newly announced QL. The area covered by this QL is home to deposits of granite and gabbro rocks. These rocks are excellent for use as a world-class aggregate in the construction industry. ”
According to Black Jaguar, the elevations, within 75 percent of the area, are enclosed by the QL and exceed 200 feet – the highest elevations exceed 300 feet.
“The 300-foot contour covers about 40 percent of the aerial size of the QL. The elevation on the bank of the Mazaruni River is less than 50 feet. The overload in this area is usually less than 40 feet. This leaves about 200 feet of rock standing above the easily removed river bank level. ”
Black Jaguar said the aerial size of the 200-foot contour line with the modifications for the riverside overload shows that approximately 300 million tonnes of rock will be available for extraction above the riverbank level.
Unlike the other quarries in operation, the company insisted that it will engage with international quarry operators to establish a number of extraction and production sites to maximize quarry output to meet current and expected demand in the local economy and regional.
“Other quarries in Guyana have a very limited approach to extraction and production, they only operate one extraction and processing system regardless of QL size and resource availability. The company plans to revolutionize the operation of the quarry industry in Guyana and to address the chronic supply shortage that has resulted in a resource-rich country having to import aggregates to meet demand. ”
Black Jaguar said the proposed facility will be developed using state-of-the-art technology to maximize operational capacity and efficiency.
“The target for initial production is 20,000 tonnes of aggregates per week. The chronic shortage of aggregates has been causing government infrastructure projects to run years beyond the anticipated deadline for completion. Government and private construction will no longer be delayed due to a shortage of aggregate supply. ”
The company said this highly efficient, new large-scale operation will allow the company to supply products to the local market in a timely manner and at very competitive prices to support the rapidly expanding development in Guyana .
The company said it hopes to produce two million tonnes a year using new equipment.
“We will reduce the cost of materials which in turn will reduce the cost of expensive projects and housing, etc., associated with the quarry sector.”