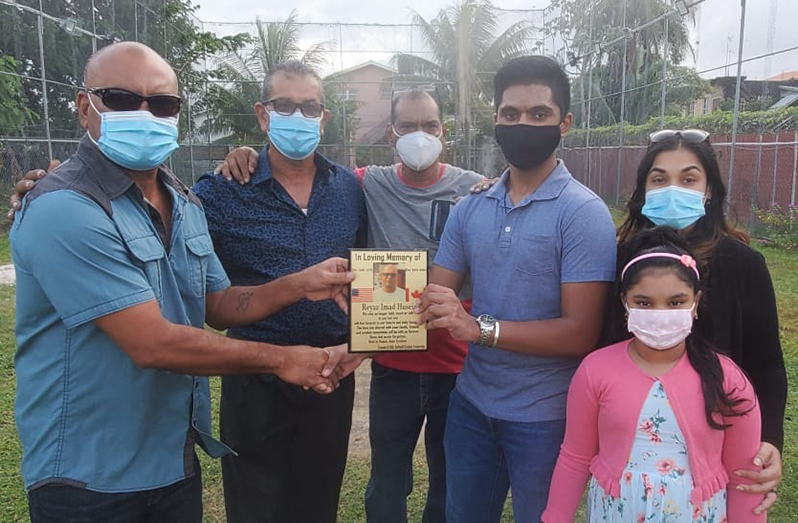 A North American softball fraternity, made up of players from Canada, New York and Florida, has paid glowing tribute to the outstanding contributions to the grassroots sport by the late Reyaz Husein.
Husein, lately vice president and player of the Guyana Lights Softball Cricket Association (GFSCA), died suddenly on December 25, last year, by shocked members of his organization and other softball lovers throughout Guyana and North America.
The plaque, sent to the Husein family, reads: “In memory of Reyaz Imdad Husein. We may no longer hold, touch or talk to you but you will be forever in our hearts and everyday thoughts.
“The love you shared with your family, friends and cricket associates will be with us forever. Gone, but never forgotten. Rest in Peace, dear brother. ”

The plaque was handed over to Hussein’s family, which included his wife Samantha, son Reyad and daughter Sarah, last Saturday by senior GFSCA officer Rickey Deonarine. Also present at Deonarine’s ‘Old Trafford’ location in Campbellville, Greater Georgetown were GFSC executive members Jailall Deodass and Ramesh Sunich of Trophy Stand fame.
The late Husein was also a popular emcee at Regional and International matches held in Guyana and performed similar duties to the GFSCA and the Guyana Cricket Board (GCB). Just days before his death, Hussein served as the moderator at the opening ceremony of the LBI floodlighting facility.
Hussein was also a long-standing member of Georgetown Cricket Club and Everest Cricket Club.
The president of the Ontario Softball Cricket Club, Azeem Khan, was primarily responsible for coordinating the North American initiative. (Frederick Halley)