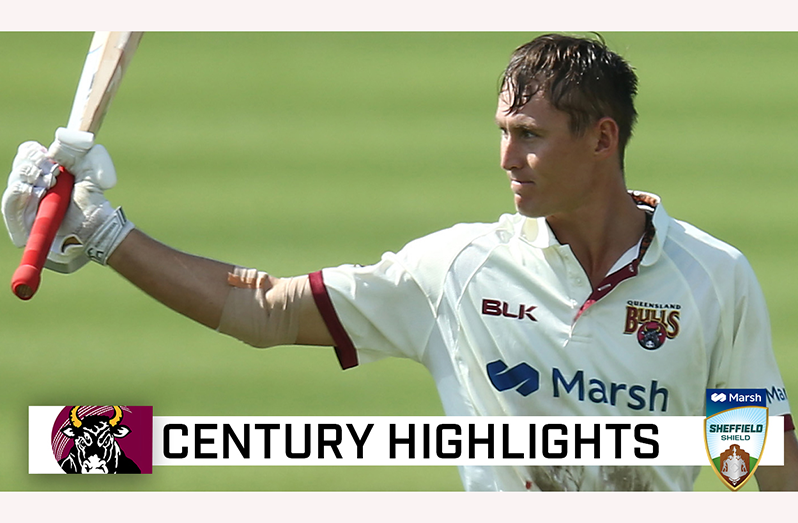 QUEENSLAND and NSW looked set to close in the final Sheffield Marsh Shield second-chance match, while Marnus Labuschagne and Nathan Lyon remained best in class as their clash at Wollongong remained in balance.

By steals on day three at Dalton North Park the Blues were 2-49, beating the Bulls by three runs.

Matthew Gilkes (24) and Jason Sangha (0) were the outfielders

With Western Australia battling Tasmania, it seems the Blues and Bulls are now likely to meet again in the final starting April 15, with the Queenslanders also in pole position to host the match.

Labuschagne (112) will undoubtedly be a central figure in the conflict, the star of the Test showing his Nappetite for runs again on Monday with his third century of the Shield season.

The No. 3 was an invincible force, cracking 11 fours in his 212-ball stay before edging Kurtis Patterson in the second slip off Trent Copeland bowling (1-48).

Usman Khawaja (64) and Jimmy Peirson (59) helped boost the Bulls total to 433 but there was little doubt who the other star of the show was.

The tireless tweaker grabbed five of the best seven wickets as the rest of the bowling squad struggled on a largely benign deck.

He now has 39 wickets at 25 for the season and will probably finish as the leading bowler of the competition.

Mitch Swepson, considered the next best spinner in the country, showed his wares when Queensland got the ball again, rising 2-9 including a stunning ball around the wicket bowled by Daniel Hughes at 16.

A draw would seem a likely outcome at Wollongong, especially given that Queensland is likely to need to make the final, but a brave NSW statement or Bulls sharp bowling performance could leave the door ajar for victory (Cricket) com.au)