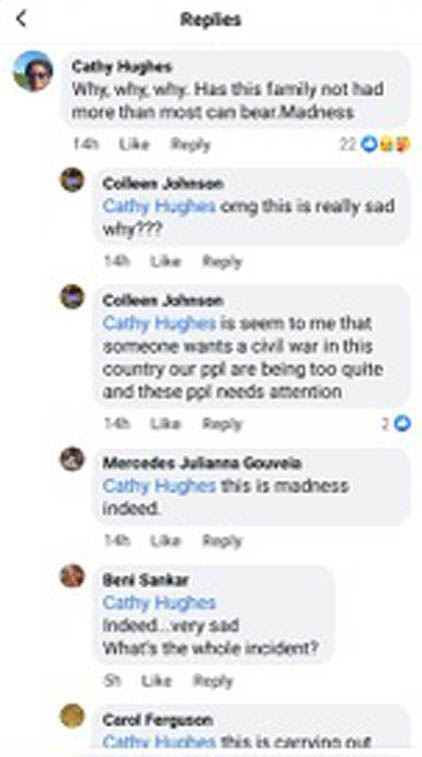 Allow me to present the facts and correct the false information in relation to a fake screenshot in circulation that claims to reflect a comment I never made.

On Wednesday December 15, 2020 I became aware that a fraudulent photoshoot of a post I made on Nigel Hughes’ Facebook page, was in circulation on various WhatsApp chats. The alleged statements screenshot I made that I didn’t and is completely untrue. 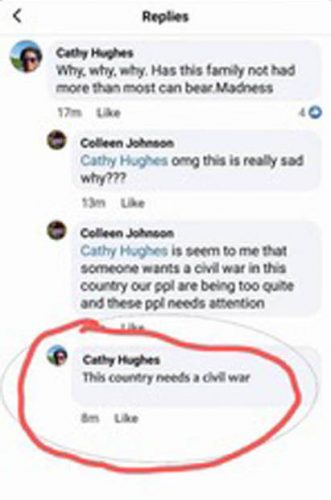 For your convenience, I highlight an image of the authentic thread of the on-screen conversation. I made one comment on this conversation “Why, Why, Why. Hasn’t this family had more than most can bare. Madness ”(appendix below)

What the culprit did is create a picture of part of the chat thread. He or she then created a mock photoshoot in which they created a response 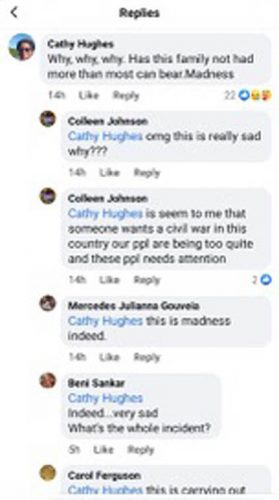 it was alleged that I was, and inserted the fake comment in the fake screenshot. This fake screenshot, maliciously doctored and tampered with, was shared on several WhatsApp conversations.

What is important to note is that, when viewed carefully, a font can see that the font of the distorted and fake comment is completely different from the font of all comments in the thread.

A check of the original post on Nigel Hughes’ Facebook page will reveal the authentic conversation and the absence of this alleged comment. There has never been this criminal comment on Nigel Hughes or I’s FB page.

This incident has brought serious and fruitless harm to my character. I have reported these incidents to the Police Commissioner and as made public, I responded to a request for information from the Ethnic Relations Commission. This is cybercrime and given my strong personal stance against racism in all its forms, I want to make sure my name is cleared.

What is worrying is that this is easy to do, it has happened to many people with dire and dangerous consequences and it will happen to many others given today’s technology.

What is needed is to monitor our social media environment appropriately technologically as is the case in other parts of the world. This must be the foundation upon which accurate forensic investigation depends.

It is interesting to note that I met with the ERC ahead of the 2020 elections at their invitation as part of the Alliance For Change delegation. I then discussed in detail the importance of the Ethnic Relations Commission having to invest in a computer-based digital media monitoring system instead of the old-fashioned way of putting people in front of a television or radio screen for long hours listening to content. There are plenty of scientific studies that have proven that monitoring can be influenced by inherent prejudices of humans. Thankfully, several facilities around the world exist that allow organizations such as the ERC to digitally monitor racist or ancillary content on Facebook, in real time, based on keyword-generated alerts. Today, it’s Cathy Hughes – the question is does the system also feel it has a responsibility to protect the victim from such abuse?