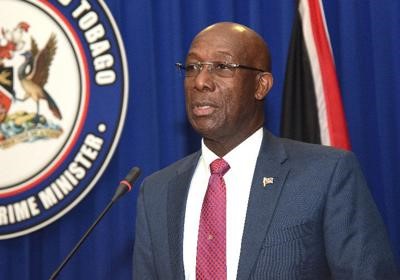 (Trinidad Express) Registered Venezuelans will get another extension of their stay in Trinidad and Tobago, this time to June 3, 2021, Prime Minister Dr Keith Rowley announced yesterday.
Current registration cards expire on December 30. A previous extension was from June to December, 2020.
The Prime Minister said during the extension period the 16,000-plus registered Venezuelans will have to re-register. He said during that time, the Government would also resolve the issue of who will get visas but stressed: “One of the things we cannot and will not do is mass deportation.”
“During the six month period there would be new and robust laws for people encouraging illegal trade (human smuggling) and tougher penalties for human trafficking,” he said.
The Prime Minister also announced the policy that currently allows the United Nations Commissioner for Human Rights (UNCHR) and Living Waters the right to register people entering Trinidad and Tobago so that migrants will have to and other parties (refugees) change ”.
“The Government is now in a position to do so itself,” he said.
During the post-Cabinet news conference held at the Diplomatic Center, St Ann’s, the Prime Minister quoted “not my favorite author (Twitter)”, US President Donald Trump.
“It’s so appropriate that I have to quote it – ‘America is a sovereign nation and our first priority is always the safety of our citizens’.”
The First Minister said: “I couldn’t agree more. Trinidad and Tobago have the same situation. ”
Rowley said that the international media was used to carry a “false narrative” about Trinidad and Tobago and that “unfortunately that would have come from public servants in the OAS (American Provinces Organization). So if I disagree with them (OAS public servants), I’m doing my job simply, ”he said.
PM: We’re a low fence
Rowley said Trinidad and Tobago’s membership of the OAS was “not at risk … We are a member and our record can stand scrutiny anytime and anywhere”. He asked rhetorically whether these OAS individuals have ever asked questions about what has been happening on the Mexican border. “We’re a low fence, anyone could jump over it, but sometimes hibiscus grows,” he said.
Turning to the issue of human trafficking and human smuggling, the Prime Minister made extensive reference to the 2013 ACP (Association of Caribbean and Pacific States) Report on human trafficking in 12 countries, of which Trinidad and Tobago was one .
“What we do know is that there are people in Venezuela who organize people to go to Trinidad and many of those people do it for profit and they are called traders. And we know that people in Trinidad, integrated with that, accept and protect and support them in Trinidad. And the laws we are going to upgrade will make it less attractive for our citizens in Trinidad and Tobago to do so. Because this is an issue that has grown in size and status and complexity and we have to evolve with it, ”said the First Minister.
“If you have people (registered migrants) staying here and urging illegals to come here, then you’re at the top of the line to go back home,” he stressed.
PM to Venezuelans: Don’t risk your lives
The Prime Minister said that drowning in Venezuela by people trying to leave Venezuela has nothing to do with the Government of Trinidad and Tobago. He said however, there were some who would try to turn this issue on its head in an attempt to involve the Government. He said the Government hoped that such a tragic event would not happen again. Stating that there are legal channels for entry where visas may or may not be granted for a period of time, the Prime Minister pleaded with Venezuelans: “Do not risk your lives when trying to enter illegally in the dead of night. on an open boat, unsafe…. And don’t encourage people to do that … You may be losing family members and of course you are breaking the law, our boundaries are closed … You act like a criminal, you break the law law and endanger people’s lives and when they are killed, you have the temerity to turn around and blame the Government of Trinidad and Tobago, ”the Prime Minister noted.
The Prime Minister said Trinidad and Tobago had “taken to his bosom” more Venezuelan migrants on a per capita and square kilometer basis than any other country. He said UNCHR would never say that because it doesn’t fit their agenda.