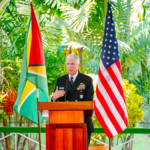 Kaieteur News – During yesterday’s press conference, US Southern Command Commander, Navy Admiral Craig S. Faller, stated that the United States of America (USA) has no intention of establishing any military bases in Guyana.
This comment was made after the signing of the Procurement and Cross-Servicing Agreement, between Guyana and the USA. The event was held at the Barabi Benab, at the State House, Carmichael Street, Georgetown.
The agreement was signed by the Chief of Staff of the Guyana Defense Force (GDF), Brigadier Godfrey Bess, and Admiral Faller. In light of Guyana’s border dispute with Venezuela, the media asked Admiral Faller whether there will be an increased U.S. military presence in Guyana, by setting up military bases in the country by sea or offshore.
Responding to the question, Admiral Faller said, “The United States is not trying to get bases anywhere in the hemisphere. We seek to have the right military presence as invited by our sovereign partners; we came only at the request of a jointly agreed partnership for practice or training. ”
Admiral US added that their future presence in Guyana will be determined by “our host and friends and that attendance will take the form of exercises and training …”
Faller was also asked if the United States is concerned that Venezuela may pose a threat to US oil company ExxonMobil, and about U.S. military support for Guyana because of Venezuela’s latest decree over local waters.
The Admiralty said, “Every country deserves the right to sovereignty and to make sovereign decisions over its resources … my visit was planned months ago.”
Noting that their sole focus is to strengthen the bilateral military relations for exercises and activities, he added that as it relates to the debate over borders and territories, the legitimate issue remains for legitimate international organizations, so have a peaceful resolution.