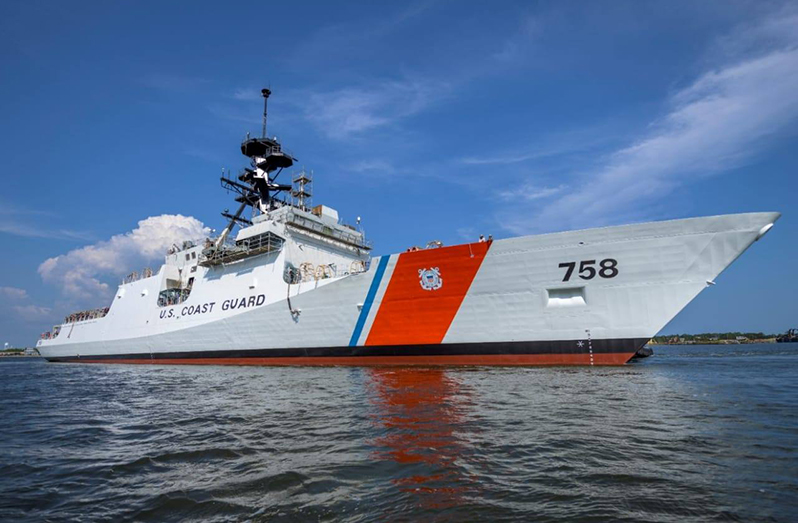 The Guyana Defense Force (GDF) Coastguards and their US counterparts on Saturday will take part in the first of a series of joint exercises as part of the implementation of the two-country ratified Shiprider Agreement in 2020.
The Shiprider Agreement will enable joint maritime and airspace patrols to interdict narcotics and illegal activities.
It will provide mechanisms to streamline communications between Guyana and US law enforcement officers to conduct offshore operations, and facilitate clearing of overlays for law enforcement aircraft in combating drug trafficking.

This exercise will take place off the coast of Guyana, and will focus primarily on illegal, unreported and unregulated (IUU) fishing.
It will be conducted in conjunction with the US Coast Guard Cutting Stone ship, which is currently in the region for a multi-country tour.
The U.S. Coast Guard has stated in a statement that, of the world’s best marine fish stocks, 93 percent is classified as fully exploited, overused or significantly depleted. IUU fishing undermines the sustainable management of these resources, pushing them to the limits of their capacity.
The ship’s first patrol to South America will see engagement with partners, including Guyana, Brazil, Uruguay, Argentina, and Portugal.

The Legend class National Security Brewers are the most technologically advanced ships in the Coastguard fleet. They measure 418 feet (127 meters) long, have a beam of 54 feet, and replace 4,500 tons at full load.
They have a top speed of 28 knots, a range of 12,000 miles, an endurance of 60 days, and a crew of about 120.
His ship’s name is former US coast guard, Cmdr. Elmer “Archie” Fowler Stone. On April 10, 1917, he became the first Coast Guard flight, having graduated from aviation training in Pensacola, Florida.
In 1919, Stone was one of two pilots to succeed in transatlantic flying in a US Navy seaplane, NC-4, which landed in Portugal.