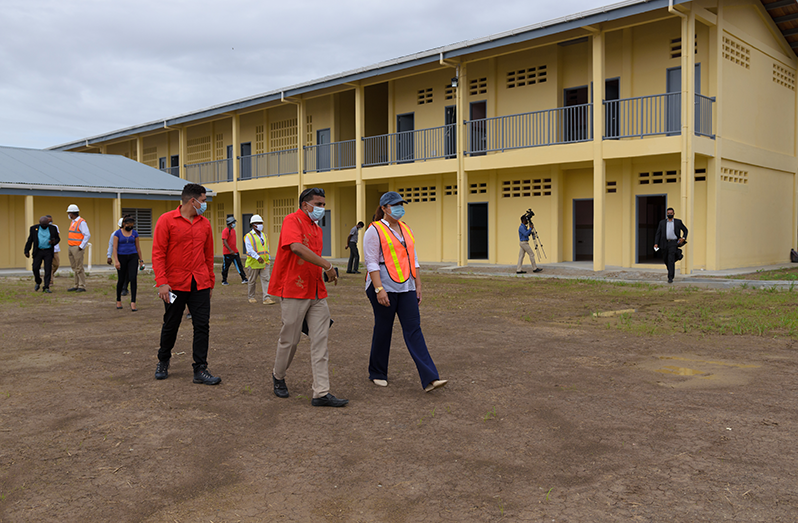 EDUCATION Minister Priya Manickchand was struck by what she saw when she visited $ 4.7 million worth of Westminster High School on Thursday, which is expected to be handed over to the Ministry of Education (MoE) before the end of this month.
The school will be the first to be completed under the Guyana Secondary Education Improvement Project (GSEIP). This program was first conceptualized in 2014, receiving US $ 10 million in funding from the World Bank. “This is going to be a game changer for us,” Minister Manickchand smartly expressed as she looked at the various amenities at the school.
Situated on approximately six acres of land, the modern school has facilities such as an elevator, multipurpose hall, music room, dance studio and laboratories for chemistry, physics and biology. Construction on the school began in October 2018 after the contract was awarded to R. Bassoo and Sons Construction Inc.
“It will be a school that will be used as a model to show that children can go anywhere well with resources and a trained teacher. It will probably be one of our largest schools with resources given the laboratories and so on we have seen, ”Minister Manickchand said in an invited comment.

At the visit, the Chief Education Officer, Dr. Marcel Hutson with Minister Manickchand; MoE Chief Engineer, Ron Eastman; MoE GSEIP Project Coordinator, Jimmy Bhojedat and Regional Education Officer, Devindra Persaud. Several representatives of the contracting company were also in attendance.
The school is built to accommodate up to 1,000 students, making it a Grade A school. It will also be a B-list school, which speaks to its quality.
“We plan to build that up to A over the next few years. We want to offer CAPE topics here. It will be fully staffed with suitably trained graduate teachers and support staff, ”Manickchand explains. The new high school is one of several being built as part of the government’s overall plan to achieve General Secondary Education under the GSEIP Program. General Secondary Education means that all Guyanese children of the required age receive secondary education.

“This school was one of six that we became pregnant in 2013, because we want to make sure we offer General Secondary Education across the country,” Manickchand noted.

Other schools being completed under the GSEIP Project include Good Hope and Yarrowkabra secondary, both of which are plagued with construction issues. The Prospect Secondary, to which the ceremonial turf was recently turned, is also under construction under this project.
When completed, Westminster High School will see the removal of the need for “Best Primary” schools in Region Three.
In Guyana, “Best Primary Schools”, are primary schools with a secondary school department, and are used as an alternative for students who would not have achieved enough marks in the National Sixth Grade Assessment (NGSA) to be placed in a secondary school .
Although a traditional high school runs from Grades Seven to 11, classes in “Primary Primary” schools run from Grades Seven to Nine, and students usually transfer to a high school after writing the Grade Assessment Nine Nationals (NGNA).
“It’s the same primary school that does secondary work, that’s of course undesirable. It is not likely to deliver the kind of outcomes we are looking for; it is not likely to give students the opportunities they need to survive best in this world and that is why we became pregnant from these schools. I’m really excited to be able to do that in Region Three, ”said Manickchand.