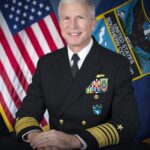 US Admiral on a 3-day visit to Guyana from Monday

Kaieteur News – United States Navy (US) Naval Engineer Craig S. Faller, commander of the United States Southern Command, is expected to visit Guyana in the coming week.
The command is one of the six unified commands of the geographically focused Deficit Department with responsibility for U.S. military operations in the Caribbean, Central America and South America, as well as security cooperation with defense and public security forces in the region.
According to a press release from the U.S. Embassy, ​​Admiral Faller is expected to arrive in Guyana on Monday, January 11th. He is due to leave two days later, on January 13th.
The statement also noted that, as part of the United States’ ongoing commitment to Guyana and its security, Admiral Faller will meet with President Irfaan Ali and Guyana Defense Force (GDF) Chief of Staff, Brigadier Godfrey Bess, to discuss a bilateral security partnership between the two countries.
The admiral is also expected to participate in the signing of a Procurement and Cross-Servicing Agreement between the militaries of the two countries. Signing that agreement will pave the way for an exchange of goods or services of equal value to support future bilateral defense cooperation.
The statement noted that the United States and Guyana have a history of security cooperation, and the defense partnership between the two countries includes cooperation against regional threats and challenges, capacity building commitments, bilateral training, exchange of expertise, exercises, and participation in military education. programs.
Last September, during Secretary of State Mike Pompeo’s visit, the two countries signed a Shipping Agreement that allows the U.S. Coast Guard to patrol local waters.
In 2017, when Guyana became the first nation in South America to host the Caribbean Nations Security Conference.