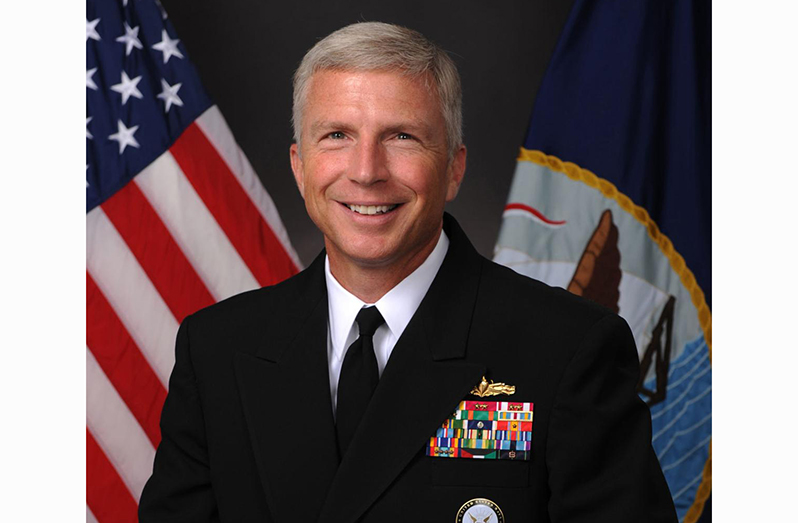 AS part of an ongoing US commitment to Guyana and its security, US Navy Admiral Craig Faller, commander of the US Southern Command, will visit Guyana January 11-13. According to a statement from the US Embassy in Georgetown, Admiral will meet with government and defense leaders and discuss the bilateral security partnership between the US and Guyana.

During his stay, Admiral Faller is due to meet the President, Dr. Mohamed Irfaan Ali and Chief of Staff, Brigadier Godfrey Bess. The Admiralty will also participate in the signing of a Procurement and Cross-Service Agreement between the militaries of the two countries, which will pave the way for the exchange of goods or services of equal value to support future bilateral defense cooperation.
The United States and Guyana have a long-standing history of security cooperation. The defense partnership between the two countries includes cooperation against regional threats and challenges, capacity building commitments, bilateral training, exchange of expertise, exercises, and participation in military education programs, the release stated.

During the visit of the Secretary of State, Mike Pompeo in 2020, the two countries signed a Shiprider agreement that allows maritime cooperation between the two countries.
The US military chief of Southern Command last visited the country in 2017, when Guyana became the first South American nation to host the Caribbean Nations Security Conference.

The order is one of six unified Defense Department commands geographically focused with responsibility for US military operations in the Caribbean, Central America and South America, as well as security cooperation with defense and public security forces in the region.

Admiral Craig Faller is a native of Fryburg, Pennsylvania and a 1983 graduate of the US Navy Academy with a Bachelor of Science in Systems Engineering. He is also a 1990 graduate of the Navy Postgraduate School with a Masters in National Security Affairs (Strategic Planning).

As Chief of USS Stethem (DDG 63), he moved to the Gulf of Arabia and participated in maritime intercept operations in support of UN sanctions against Iraq. During his tour as Chief of the USS Shiloh (CG 67), he helped victims of the devastating tsunami off Indonesia. Finally, as Commander, John C. Stennis Strike Group / Three Carrier Strike Group, he moved to the Middle East to support New Dawn Operations (Iraq) and Persistent Freedom (Afghanistan).
Admiral Faller has won various personal, unit, service and campaign awards.