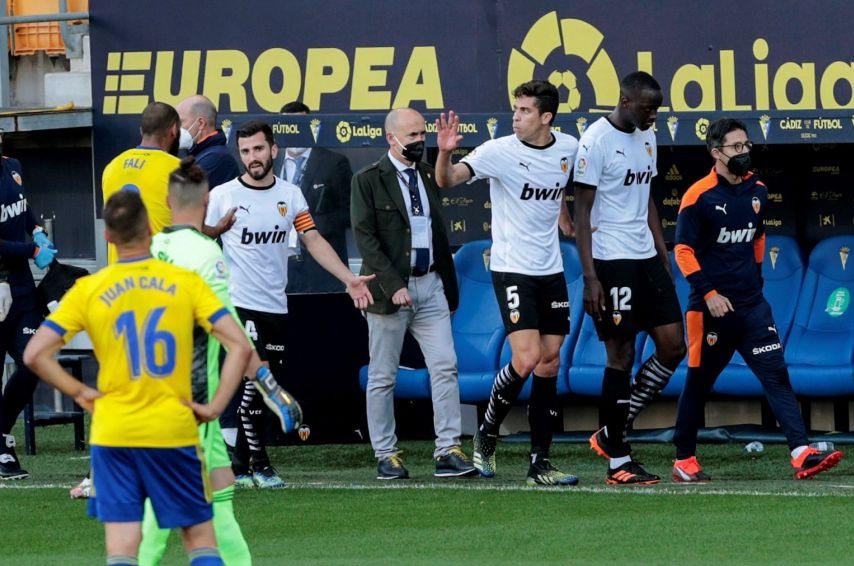 (Reuters) – Organizers told Valencia to resume playing La Liga game yesterday in Cadiz or that they would have to forfeit the points after they left the field when Mouctar Diakhaby complained that he had been racially abused, he says defender Jose Gaya.

Valencia players walked off the field in the 29th minute after Frenchman Diakhaby reacted furiously following a moment with Spanish Cadiz center back Juan Cala.

This was the first time a La Liga fight had been suspended following an accusation of racism. The players eventually returned to the field but did so without Diakhaby, who said he was not in the right condition to continue playing and was deputed. He was also shown a yellow card before Valencia players left the field.

The score was 1-1 when the visitors walked away and Cadiz went on to win the game 2-1 after an 88 minute strike by Marcos Mauro, who came off the bench to replace Cala.

“Diakhaby told us he heard a racist insult so we all went off the field. We were told we had to play because if we didn’t do that they would take away the three points and we could cut back more points, “Gaya told the Spanish network Movistar.

“Diakhaby asked us to play on, we wouldn’t have done it if he didn’t. He said he wasn’t in the right mood to keep playing. He’s really mad. ”

Gaya said he heard the comment Cala made to Diakhaby.

He added: “It was a very ugly insult that I will not repeat. We haven’t been able to talk to Cala because he was the last player to leave the field. I’m sure he said something. It was a very strange game. ”

Cadiz coach Alvaro Cervera said Cala told him he had not insulted Diakhaby, adding that he pulled the player off at half-time because he was already on order and did not want to risk being sent away.

Cala had put Cadiz ahead in the 14th minute before Kevin Gameiro soon equalized for the visitors.

La Liga did not respond to a request for comment on Gaya’s statements.

Valencia coach Javi Gracia said Diakhaby had been “seriously insulted and quite shaken”.

He added: “We logically decided to tell the referee that we didn’t agree with that (play on) and that we didn’t want to continue playing. While we were in the dressing room we were told that we could possibly be punished if we didn’t return.

“We spoke to Diakhaby, he said he couldn’t play but he understood that we needed to get back to playing instead of being punished and so we returned with the intention of fighting for the victory.”

Gracia added that the match referee and assistants did not know what Diakhaby had been told. Nor did he reveal who had told his team they could be punished.