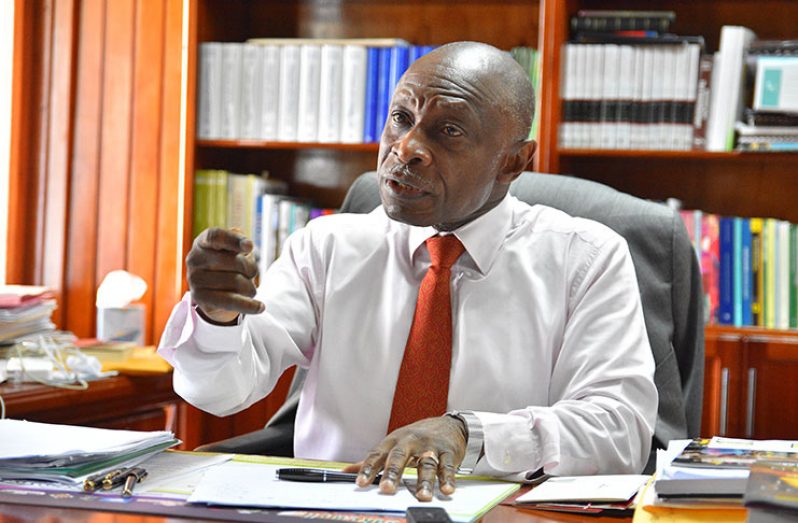 – Greenidge says Guyana does not agree with the request, but will work with the court

By Navendra Seoraj
VENEZUELA’s application to the International Court of Justice (ICJ) for an extension of the date for managing the case of the Guyana-Venezuela border dispute, although allowed by the court, is being considered by Guyana as a tactic to divert the ICJ from her “noble. procedures, ”said a Frontier Adviser at the Ministry of Foreign Affairs and International Cooperation, Carl Greenidge.
The case management hearing was initially scheduled for January 25, 2021, but, because of the request from Venezuela, this hearing has been postponed until February 26.

Managing a case in legal terms refers to the schedule of the case relating to an issue. There are various stages in litigation, such as filing a complaint, answers, the discovery process (questions, subrogation, depositions etc), and motions that occur before trial or decision is granted.
Venezuela had requested that this exercise be deferred for three months. However, the court granted an extension of only one month.
“The applications submitted to the ICJ are only intended to divert the court from its noble procedures,” Greenidge said during a telephone interview with the Guyana Chronicle on Monday.
In March 2018, Guyana filed its application in the ICJ seeking confirmation of the validity of the1899 Arbitration Award and the international border it established.

On June 30, Guyana, in his virtual presentation of the October 1899 Arbitration Award (Guyana v. Venezuela), said not only that Venezuela’s current interpretation of the Geneva Treaty is illogical and inaccurate, but is in stark contrast to the Spanish country was acquired when the exact agreement was signed in February 1966.
Represented by a battery of international lawyers, Guyana said the agreement, in unambiguous terms, empowered the Secretary-General of the United Nations (UN) to determine an appropriate resolution mechanism to enable a peaceful settlement, the ICJ.
The ICJ ruled on December 18, 2020, that it had jurisdiction to hear the case of the Guyana-Venezuela border dispute.

FINAL AND BINDING OPINION
Guyana seeks final and binding judgment that the 1899 Arbitration Award, which established the location of the land border between British Guiana and Venezuela at the time, remains valid, and that the Essequibo region belongs to Guyana, and not Venezuela.

Greenidge believes that, just as Guyana is aware, the court should also be aware that Venezuela has stated, for the longest time, that it has no interest in resolving this issue by the court.
For this very reason Guyana is against Venezuela’s request to delay the court process, which is expected to bring an end to the ongoing border debate peacefully.
“We have done nothing more than indicate to the court that we do not agree with the explanation provided in the application, particularly as the case management is procedural and does not require any form of preparation, which will take three a month for any one party, ”said Greenidge.

His view, however, is that the extension granted by the ICJ cannot help Venezuela because the country has searched for 50 years and still cannot find information to prove that the October 1899 Arbitration Award was invalid.
“What they couldn’t find in 50 years, they won’t be able to find it in a few months,” Greenidge asserted.
The extension, while not useful to Venezuela, is more likely to be good for the ICJ as the court is expected to move to a new President within a few days.
In explaining this, Greenidge said: “The delay may give the court more time for the matter to be considered by the new President and his team.”

Nevertheless, Guyana remains prepared to work with the court to ensure that it completes its work quickly and without the diversions and unrest Venezuela is trying to initiate.

Venezuela’s President, Nicolás Maduro, on January 7, 2021, issued a decree claiming Venezuela’s sovereignty and exclusive sovereign rights in the waters and seabed off the coast of Guyana, west of the Essequibo River.
Since then the President, Dr. Irfaan Ali has rejected Venezuela’s latest allegation and has stated that it will not receive any legal attention from any other State in the world, as well as Guyana.