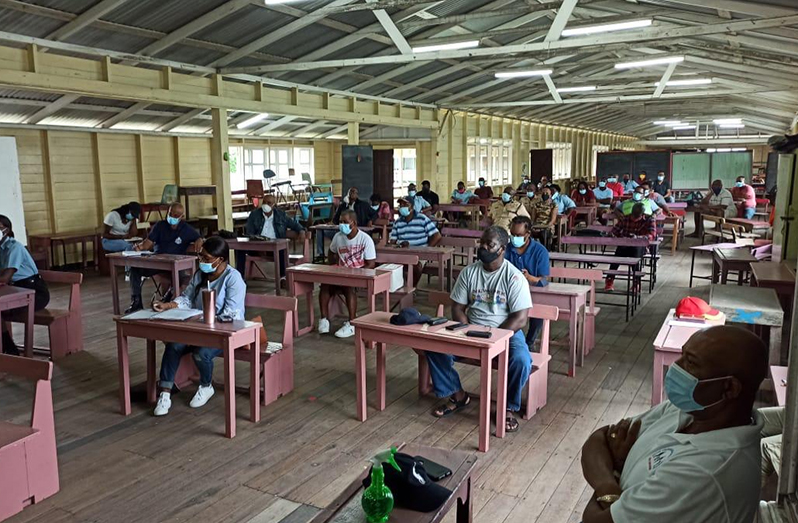 DEPUTY Police (and) ‘Operations’ Commissioner Clifton Hicken advises residents of Diamond / Grove, on the east bank of Demerara to work with the police, the Neighborhood Democratic Council (NDC) and the Community Policing Groups (CPGs) to identify vulnerable young people and enrolled in development programs.
At a subsequent meeting held at the former Grove Primary School on Saturday, Hicken stated that parents of vulnerable young people should be contacted and steps taken to provide vocational skills training to the young people for their personal development.

The senior cop also called on the corporate community to play their part in helping to run such training programs as part of the crime reduction effort. Hicken and his team have held several meetings with Grove / Diamond residents, beginning last year, following an increase in robberies; he noted that there had been a reduction in crime since then.

He emphasized that more had to be done in the community to further reduce crime and to engage the young people meaningfully. Further, the Deputy Police Commissioner reiterated the importance of building a partnership with the residents by communicating through WhatsApp sing groups in order to take faster action in cases of suspected criminal activity.

This, he said, will help reduce criminal activity in the area and improve community vigilance. Residents, during the meeting, raised several issues and concerns that were all addressed while the police were praised for their diligence during the Christmas season in reducing crime and noise nuisance.
In addition, residents also recommended that a few streets in the community be converted to one-way traffic in an effort to ease traffic congestion in the area. As such, the divisional traffic officer was tasked with carrying out an assessment to determine if the recommendation was feasible.
Meanwhile, in highlighting the results following the last meeting in December 2020, Hicken revealed that a total of 75 street lights had been installed.

This, he said, was made possible by Diamond / Grove NDC Chairman Indranie Ramnarine and the team through the assistance of Prime Minister, Brigadier (rt’d), Mark Phillips.

He further revealed that all the redundant stalls in the area had been relocated, that vendors were relocated to the Diamond Market Tarmac and that some had received letters to stop selling illegally.

Division 4 ‘B’ Manager, Senior Superintendent Linden Isles, who attended the meeting, thanked the residents for their partnership and also committed to continuing similar meetings in the Region 4 ‘B’ area (East Bank District).

Also in attendance were Deputy Commander 4 ‘B’, Superintendent Loraine Saul and Chair of the Diamond / Grove NDC, Indranie Ramnarine