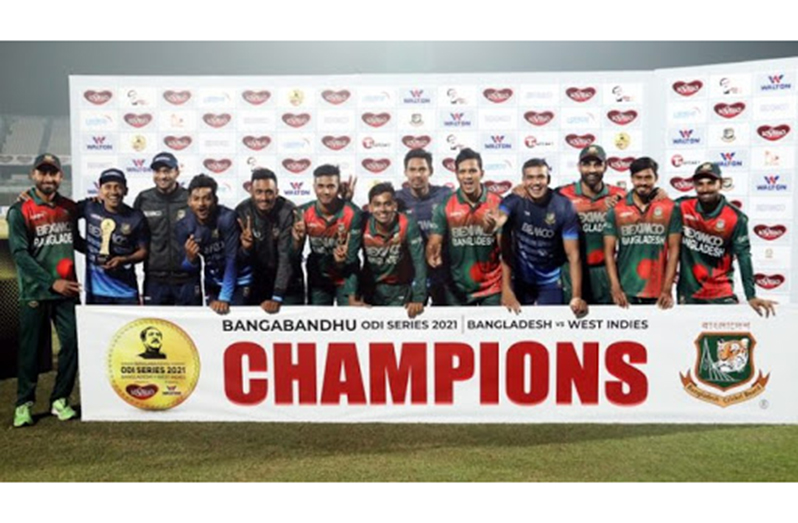 CHATTOGRAM, Bangladesh, (CMC) – A decision to go back for the first time in the series saw no change in fate for the West Indies as Bangladesh defeated them by 120 runs to complete an emphatic whitewash here on Monday.

When asked to chase down a challenging 298 in the third One-Day International at Zahur Ahmed Chowdhury Stadium, there was always an inevitable air about the defeat as the Caribbean side lost wickets steadily to fall to 177 all out in the 45th over.

Rovman Powell scored best for the second straight game with 47 while Nkrumah Bonner broke in with 31 and Raymon Reifer, 27, but there was little doubt about the result once West Indies tripled to 93 for four on the halfway stage, with the required running rate reaching almost 8-½ over.

Fast bowlers Mohammad Saifuddin (3-51) and Mustafizur Rahman (2-24) did most of the damage while spinner Mehidy Hasan Miraz did brilliantly, taking two for 18 of his 10 overs. Choosing to bow earlier, West Indies. missed crucial opportunities as Bangladesh piled up 297 for six overs

Their 50 overs, with captain Tamim Iqbal, wicketkeeper Mushfiqur Rahim and Mahmudullah all scoring 64 and Shakib-al-Hasan providing the fourth half of the half century with 51.

After batting first in the two ODIs in Dhaka last week, the West Indies were under hopes that a change of approach and venue would have reaped rewards but after two initial developments, the attack went flat and the hosts took control on the pubs.

New ball sailor Alzarri Joseph, who finished with two for 48, gave West Indies a bright start when Liton Das (0) pinned his bottom with a fifth ball of the morning to win a lbw decision, ahead of midfielder Kyle Mayers Najmul Hossain Shanto accounted for 20 as well through the lbw pass in the ninth over, to claim his first wicket in ODIs.

However, once Shakib arrived to join Tamim in a third wicket stand run by 93, it marked the end of any West Indies hopes of limiting the hosts to an achievable total.

The Tamim left hit three fours and a six off 80 ball while Shakib, dropped before he scored a sharp catch back for Mayers, punched three fours off 81 balls.

Tamim accelerated after reaching his 49th ODI by nailing Akeal Hosein in the middle of the wicket off a short ball from Joseph (2-48) but a series of partnerships kept Bangladesh at the top.

Shakib added another 48 for the fourth wicket with Mushfiqur who went on to deliver 72 off 58 deliveries for the fifth wicket with Mahmudullah, as West Indies faded completely.

Left arm controller Reifer (2-61) bowled Shakib with a slower ball in the 37th over but Mushfiqur beat four fours and two sixes in a dreadful 55 balls while Mahmudullah tasted three fours and six in an unbeaten cameo An exciting 43-ball, to speed up the scoring in the back of the innings.

As they needed a good start to kick off their first serious challenge of the series, West Indies watched as Saifuddin and Mustafizur sliced ​​through top order to lower the innings to 93 for five in the 26th over.

Kjorn Ottley, the left wing, died in the second over at seven, pushing a pointless push at Mustafizur behind and his opening partner Sunil Ambris completed a pitiful run when he played around a straight delivery from the same bowler and in lbw for 13 in the sixth over.

Mehidy Hasan then hit Kyle Mayers in front at 11 in the 13th over and put captain Jason Mohammed (17) ahead 32 for the fourth wicket with Bonner before edging behind Saifuddin in the 24th.

When Bonner, who struck two fours in a 66-ball knock, was bowled by Saifuddin and was followed by striker Jahmar Hamilton (5) in the 31st caught off Mehidy Hasan, West Indies was towing at 117 am six and at risk of falling below 150 for the third time in the series.

But Powell halted the slide, hitting two fours four and six in a 49-ball knock while adding a crucial 38 for the seventh wicket with Reifer.

Soumya broke the stand when Powell caught a lbw with his medium speed and the tail quickly folded with the last three wickets falling for just three runs.