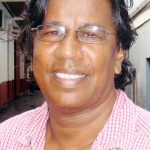 Kaieteur News – I was walking my dog ​​on Eve Leary’s barges last Friday morning, when the phone rang and the person said: “Do you know who is talking to you?” In reply I did not, he stated himself He was a friend of mine, now Deputy Mayor of Georgetown, Alfred Mentore.
As we spoke, my dog ​​bolted from me and I had to cut the conversation short, but, I went out, “can I quote you,” and said yes. The Deputy Mayor called on me to offer his response to my column on Friday on the City Council. It was intoning that more than 50 percent of those thousands of buildings that have gone up in Georgetown over the past umpteen years that I referred to in my article do not pay rates and taxes.
I told him I couldn’t believe it. It makes no sense at all in a modern state. As he insisted that was the fact, the dog bolted and I had to go. I left the barrage, drove down Camp Road into Camp Street, turned left into Lamaha Street when the phone rang. He was the Mayor.
Like his deputy, he wanted to talk. I couldn’t because I was driving but I said one thing and answered with two things. I told him what his deputy said. He reiterated that. Then he said he would like to go on Kaieteur Radio with me to explain the reality painted by Mentore. Let’s run this scenario with you again so that it can stick in your mind and you can act on it.
My column on Friday describes the thousands of humorous buildings many have erected in the last 10 to fifteen years that should bring in billions annually for City Hall. I argued that, given the large number of urban structures that dot the capital city of Guyana, City Hall cannot be out of money; on the contrary, he should be alert with money. The Mayor and his deputy say that this atmosphere that I have described is misleading. The money from those thousands of buildings is not coming in because over 50 percent of those gargantuan, beautiful structures do not pay rates and taxes.
Mentore said there is almost nothing City Hall can do to force taxpayers to achieve other than sue them. He added that successive governments have done nothing to remedy this situation. So is this country real? You build a large building, you set up your operation in it and you refuse to pay rates and taxes. And life goes on.
What happens then to the thousands of ordinary people who join from 7am in the morning to pay their rates and taxes at City Hall? My wife insists every year that we have to pay on January 2. I went there and the line was endless and I came home. My mother-in-law ran a supermarket in Louisa Row and Hadfield Street. He went out of business 12 years now and died five years ago. And yet, we pay a staggering amount each year to City Hall.
The word “crazy” cannot be the correct term to use to describe what the Mayor and his deputy said to me. How in the real world can owners of thousands of city buildings refuse to pay rates and taxes and there is nothing the City Council can do? Some relevant questions arise. These owners do they pay car insurance for? Do they pay water and electricity rates? Do they pay their NIS for employees? Do they pay their insurance companies for health and fire coverage? Do they pay VAT to GRA?
I told Mentore that what he was describing was surreal. After talking to both men, a thought crossed my mind. They are both APNU advisers. The Mayor called for a statement of the March 2020 election based on Mingo tables. Why did these men never ask for legislation from their party that was in force for five years?
The PNC votes in Georgetown always double the PPP votes in national elections. The PNC always wins Georgetown in municipal elections nationwide. In the traditional Georgetown PNC constituencies. Why has the Mayor, his Deputy and PNC councilors never demanded that this evil be eliminated through legislation? The law can be formulated in simple terms. After two years of negligence, the taxpayer is warned. After five years, the taxpayer goes to a special court which forces him to pay. Three years after non-payment, if it still fails, the building is erected. Please tell me is that not the law in other countries?

(The views expressed in this article are those of the author and do not necessarily reflect the views of this newspaper.)