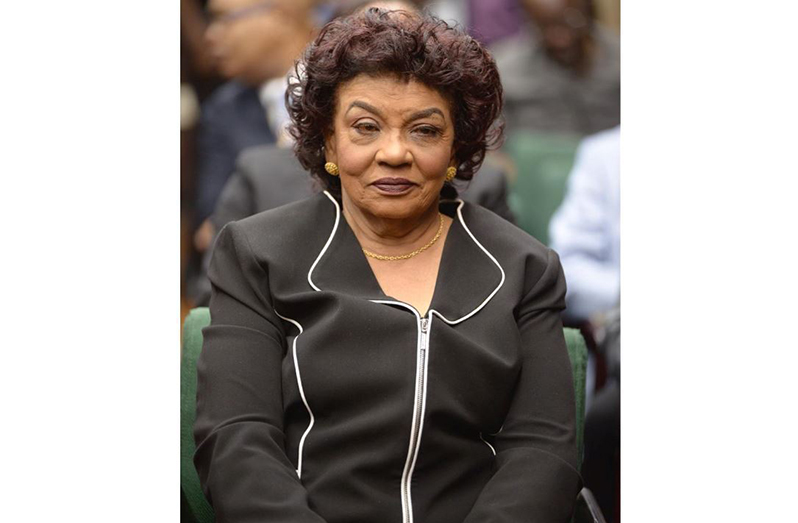 – The Chair of GECOM states that the Commission cannot make urgent changes; the law must run its course

By Navendra Seoraj
PUBLIC confidence in individuals attached to the Guyana Election Commission (GECOM) is allegedly eroded by the events that occurred during a five-month crisis, following polling day on March 2, 2020, and, although there have been growing calls about moving people right away, GECOM Chairman Justice (ret’d) Claudette Singh, has said the commission cannot act hastily, as the law has to run its course.

Calls for people to be removed from the commission are growing now more than ever because the country is likely to “go to the polls” again in 2021, for the Local Government Elections (LGE).

With those elections coming on the heels of a controversial General and Regional Elections, which ended with a victory for the People / Civic Progressive Party (PPP / C) on August 2, 2020, stakeholders believe that The country’s election machines must be ‘fixed first’ in order to have a transparent and legal process.

The Private Sector Commission (PSC) is the latest stakeholder to add its voice to calls for administrative changes to be in GECOM before the LGE is convened.
According to a statement from the PCC on Saturday, GECOM’s senior officials, including the Chief Returning Officer (CEO), Keith Lowenfield, and District Four Returning Officer (Demerara-Mahaica), Clairmont Mingo, are before the courts for public office. ”

They are all accused of inflating the results of Region Four – Guyana’s largest polling district – to give the A Partnership for National Unity + Alliance for Change (APNU + AFC) Coalition a majority victory in the March 2 polls when in fact, the PPP / C had won 15,000 more votes.

“However, as far as we know, none of these officers have been dismissed from their employment with GECOM, nor have they been suspended from duty.
“It is unthinkable and certainly unacceptable that GECOM should go on to hold Local Government Elections while these officers continue to be employed and involved in the conduct of these elections,” said the PSC.

Justice Singh, when asked about this during an interview on Saturday, told the Guyana Chronicle: “We have an election petition pending and we have people being charged in court… we are going to let that go on first and let the court follow its course. You can’t just jump up like that; we look at legality in everything. ”

However, this issue has not yet been raised at the commission level, but the chairman said that such a topic would require serious discussion and discussion.
“We have to follow the law … things may look slow, but not slow, we are following the law … I don’t know what they want us to do, we can’t jump like that .
“It’s not that we’re going to hold back our people and not do whatever … wherever the ax falls, we will have to work with it,” said Justice Singh.
And, while this issue is far from second to none, the chairman reiterated that the petition and accusations against individuals attached to the elections body must be borne in mind by the commission.

On August 31, 2020, the APNU + AFC Coalition), through her lawyer, Roysdale Forde, SC, filed the documents on behalf of Claudette Thorne while on September 17, attorney Mayo Robertson filed documents on behalf of Heston Bostwick, who both wanted the High Court to determine the legitimacy of the elections, and the consequences that led to the declaration and allocation of seats in the National Assembly.

The PSC has since claimed that this petition cannot be used as a means of delaying or delaying GECOM’s willingness to hold an election.
And, while Justice Singh is clear that GECOM will continue to follow Guyana’s laws, he said the commission is doing everything possible to prepare for the Local Government Elections.

NEW ID CARDS
The commission, as well as preparing a budget for the LGE, is still working on issuing ID Cards to not only individuals who would have lost their own, but also those who would have registered during the year. the recent house-to-house. registration exercise.

Prior to the March 2 elections, GECOM had undertaken house-to-house registration with the aim of creating a new National Registry Database (NRRD), but this process had to be cut short by Justice Singh in following the Caribbean Court ruling. Justice (CCJ) ratified the No Confidence motion passed against the then APNU + AFC government, necessitating the holding of Regional and General Elections in the shortest possible time.

With individuals, who registered during this process, still eligible for an ID card, Justice Singh said that the commission will have to decide whether to ask them to re-register or examine the scrutiny of those registrants subjected to them.

“We are discussing the way forward with them, whether we have to ask them to re-register or see what scrutiny they passed through … we have to be sure we don’t have any duplicates … so we’re doing everything right now to see that through, “the chairman said.

ELECTORAL AMENDMENT
In addition, the commission is awaiting a response from agencies such as the United Nations Development Program (UNDP), which would have provided assistance in the field of electoral reform.

“That’s another matter … we’ve been promised help and, I don’t know, I see the government talking about something else … I know what I was promised … a gentleman came from the UNDP in and promised to come back to me. He sent some documents to show what they have done in other countries… so we will certainly have help with the list etc, ”said Justice Singh.

He said that while the chairman was confident of receiving support from foreign organizations, he may not be done in time for LGE, but will be done before the next General and Regional Elections.

The European Union (EU), which had welcomed the “democratic” conclusion of Guyana’s elections, had also said it was ready to assist with electoral reforms.
Based on the recommendations presented in the final report of the European Union Election Observation Mission (EU EOM), the EU is ready to support this reform process in cooperation with the GECOM and other electoral stakeholders.

President Irfaan Ali; Vice President, Bharrat Jagdeo; Justice Singh and GECOM Commissioners Sase Gunraj and Vincent Alexander have all agreed that things need to be “stable” before elections are held.

However, although the Vice President confirmed that the party is not against the LGE holding, he had said that the integrity of persons, still employed by GECOM, had been lost after the full five-month contingency of events, following March 2, 2020, general and regional elections.

“The PPP / C wants LGE next year; we think we can do very well at LGE and we’re going to be working really hard, COVID [COVID-19] or not to ensure that we improve the lives of people in their communities throughout this country.

“Next year’s budget will be resourced to prepare for Local Government Elections … but with the offenders, we have no confidence with criminals running the system … we expect the commission to get rid of the criminals,” said Jagdeo.