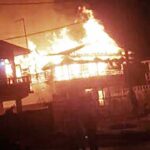 Woman allegedly set on fire after an argument, released on bail

Kaieteur News – The woman who allegedly set a house on fire after an argument with her ex-boyfriend, appeared in court Friday and was set on $ 50,000, bail for the crime.

The house burst into flames.

The defendant, Lashawna Desanzea, of the Stevedore Housing Scheme, North Ruimveldt, Georgetown, appeared at Georgetown Magistrates Court before Chief Justice Faith McGusty.
Desanzea denied the charge alleging, on Dec. 29, 2020, at Lot 3725 Christiani Street, North Ruimveldt, Georgetown, that she unlawfully and maliciously set a building, specifically a $ 3M dwelling containing $ 150,000 home appliances, property of Delon Joseph.
The court heard that Desanzea and Joseph had a child together and would usually spend time in the house. On the day in question, around 20:00 hours, Desanzea and Joseph were in the bedroom when she told Joseph she wanted something to eat. As a result of Desanzea’s request, a controversy ensued.
Following the row, Joseph left the house and Desanzea in a fit of rage, entered the kitchen and allegedly set fire to a kero stove before throwing him to bed. As the fire spread, Desanzea quickly made his way out of the house.
Guyana Fire Service (GFS) was alerted and people of public spirit in the area were able to capture Desanzea and was subsequently taken to North Ruimveldt Police Outpost. She was arrested, taken into custody, and subsequently charged.
Chief Magistrate McGusty set Desanzea on bail and adjourned the matter until January 29, 2021.