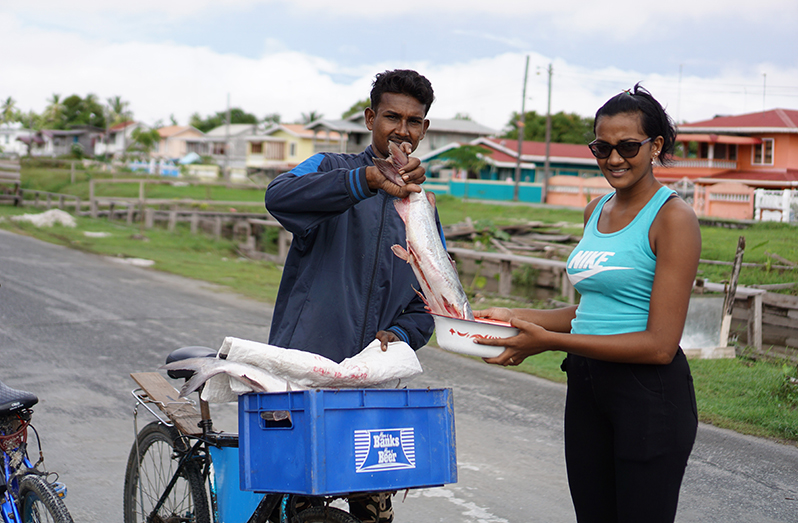 NIGHT even though it was a rainy day, Ramesh Sookhai didn’t mind; he was standing there waiting for any fishing boat to arrive so he could win.

He is one of many men who would buy fish from the fishermen when they returned from their fishing trips the same day.

At Zeelugt, East Bank Essequibo, Bridge Creek is where the fishing boats are moored before going on fishing trips and when they return from that trip it is usually a host of activities.

The fishmonger, after buying the catch of the day, would ride his motorbike which has a carrier attached at the back to store fish and which would sell throughout several villages, including Zeelugt.

Sookhai told Pepperpot Magazine that selling fish is his main source of income and he relies on it to support his family of three.

The 46-year-old was hopeful that day that a fishing boat would return and be well on its way to winning.

Sookhai added that he would only buy the bigger fish and not buy shrimp or banga.

“People prefer to buy the big fish, even if you have to cut it up and sell it; they would buy that because that’s what they want, ”he said.

He related that because of the pandemic and the holidays, most anglers were not venturing out to sea; as such, there is a shortage of fish and people have been asking for some to eat.

The father-of-two said the tide is also low, so the anglers are waiting for spring tide to go back to the Atlantic Ocean to fish, which is the ideal time to make good catches.

He explained that a few boats would make day trips and he relies on those boats to bring back good catches, so he can buy and go on sale.

Sookhai hails from Meten-Meer-Zorg Village, a few villages away, but would often be in Zeelugt where he has to wait to earn a living on a daily basis.

At Bridge Creek, in Zeelugt, there are many fishermen who repaired their seines, while others carried out repairs on their boats.

Pepperpot Magazine also met another fishmonger, Sookdeo Mahadeo, who rides and sells on his bike daily.

He also bought fish for sale in the community and lives at Sideline Dam, Zeelugt, with his wife and child.

The 32-year-old said he would also do fruit punch and snow cones and sell in the village, as well as ‘busyness’ sides to make ends meet.

Mahadeo pointed out that he would go from Meten-Meer-Zorg to Tuschen on his bike selling fish daily, usually in the morning hours, after which he would take a break and then prepare to go on another bike selling snow cones and strawberry flavored punch.

“I had to find things to do to make a living because I had an accident that left my leg unstable, and I have to have surgery so I use the bikes I have ‘ u make it special to ride around and sell, ”he said.

Mahadeo revealed that he would buy fresh fruit at Tuschen Market, wash them, chop them up and mix and add strawberry and condensed milk flavor and bag it as a fruit punch for sale.

Ice is added to the mix and once the required flavor has been achieved, it would make it ready for sale in the community.

He related that it was a recipe he learned while living in Venezuela, and when he was forced to return to Guyana, his birthplace, he used it to make a living because he couldn’t find a job.

“I made my two bikes especially; after purchasing, I added carriers to accommodate a fish basket and snack cooling machine, because that needs to be cool for the fruit punch and ice storage too, ”he said.